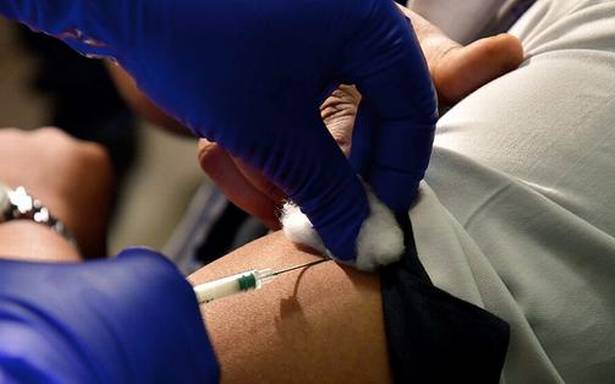 The State will start the second dose vaccination of healthcare workers from Monday. A decision to this effect was taken at a meeting with officials from the Centre.

This is despite a WHO panel suggesting an interval of 8-12 weeks between doses. COVID-19 experts in the State have also suggested that giving the second dose after eight weeks not only offers higher efficacy but will also give ample time to plan and cover more people. However, the State cannot take a call on its own and has to follow the Centre’s guidelines that say the second dose should be given 28 days after the first.

In Karnataka, a total of 13,408 healthcare workers had taken the vaccine on Day 1 of the drive that began on January 16. Most were administered Covishield and were due for the second dose on February 13.

Giridhara Babu, member, State’s Technical Advisory Committee (TAC), who heads Lifecourse Epidemiology at Indian Institute of Public Health, said he had in his individual capacity suggested to the State government to propose an 8-week interval between doses. “I have been saying this from the beginning and have tweeted about it several times. I am not sure why the Government of India is not yet considering changing the interval between doses. There is clear evidence that the efficacy is high if the second dose is given after 8-12 weeks,” he said.

Pointing out that an expert WHO panel has suggested an 8-12 week interval between two doses, Dr. Babu said the vaccine experts have to take a call now.

V. Ravi, former senior professor and head of Neurovirology at NIMHANS, also a TAC member, said he had also suggested that the gap between doses be at least eight weeks. “Maybe the government, which is already dealing with vaccine hesitancy, is concerned that the drop out rate will be high if the second dose is delayed beyond 28 days,” he said.

C.N. Manjunath, nodal officer for labs and testing in the State’s COVID-19 task force, said although evidence suggests that the efficacy is better if the interval between two doses is high, it is better to stick to the schedule of vaccination.

“According to the factsheet of Covishield, if the second dose is taken within six weeks from first dose, the efficacy is 53.2%. It increases to 60.5% if the spacing is 9-11 weeks. If it is 12 weeks apart, it would be 78.7%. But the Centre has chalked out a protocol that has to be followed. Otherwise the entire vaccination programme and timeline will be disrupted,” he said.

Meanwhile, the State has achieved a cumulative coverage of 47% with 5,17,185 of the targeted 11,08,558 healthcare and frontline workers vaccinated so far.