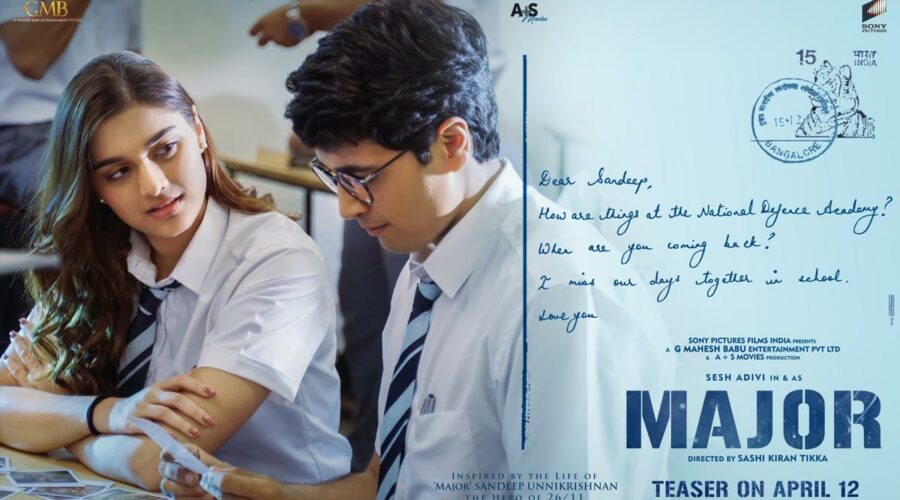 Adivi Sesh who is known for acting in Kshanam, Goodachari and Evaru, is currently working for his upcoming film Major, which is all about the heroic act of  Major Sandeep Unnikrishnan in the 26/11 attacks of 2008. Yesterday, the makers of major released  the first glimpse of actress Saiee Manjrekar, who is playing the female lead in Adivi Sesh starrer. Coming on the first glimpse, Adivi Sesh is seen with his school time girlfriend  during their school days and  both are seen in school uniform.

When Adivi Sesh, who is playing the titular role, leaves to the Defence Academy,  Saiee Manjrekar  writes a letter to her. By sharing this glimpse, the makers of Major confirmed that the teaser of this film will be unveiled on 12th April.

Helmed by Sashi Kiran Tikka and  The film Major is bankrolled  by  superstar Mahesh Babu under his home banner GMB Entertainment in association with  the Sony Pictures Productions banners.   Major also has Sobhita Dhulipala, Murali Sharma, Prakash Raj and Revathi in the crucial roles and it is slated to hit the theaters  July  Worldwide in a very grand manner.

On the otherside, actress Saiee Manjrekar is also working with Mega Prince  Varun Tej in the sport based drama titled Ghani.