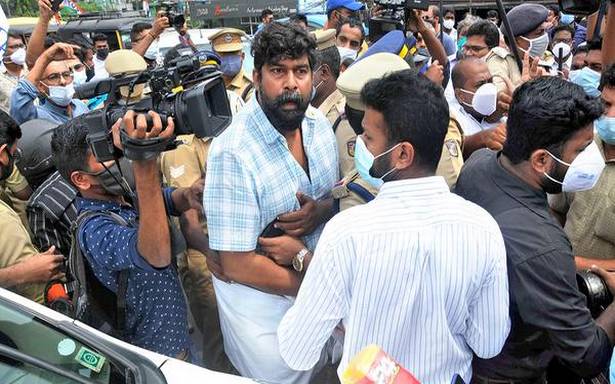 A blockade of the Vyttila-Edappally NH bypass organised by the Ernakulam District Congress Committee (DCC) on Monday against the spiralling fuel price caused traffic snarls on the stretch and choked traffic on other roads in the city. Actor Joju George, who objected to the blockade, was injured in a stand-off with the party workers and the rear windscreen of his car was shattered in the melee.

The Maradu police registered two cases against the party activists. They have been charged with under Indian Penal Code Sections 143 (unlawful assembly), 147 (rioting) and 283 (posing danger or obstruction in public way) and under Kerala Epidemic Diseases Ordinance, 2020 for gathering in violation of social-distancing norms, in a suo motu case by the police. In addition, they have been charged under IPC Sections 341 (wrongful restraint), 323 (voluntarily causing hurt) 294 B (use of obscene words), 427 (a mischief that caused damage) and 506 (criminal intimidation), apart from Kerala Prevention of Damage to Private Property and Payment of Compensation Act, 2019, based on a complaint by the actor.

The traffic regulations of the police did not yield the desired results and the traffic gridlocks lasted well after 2 p.m. A large number of people were stranded on the road on a day when schools reopened in the State.

On the allegation that the actor spoke rudely to women, a senior police officer said video footage of the incident was available and action would be taken based on it. With a section of activists alleging that he was drunk, he volunteered to do a blood test. The result from Tripunithura Taluk Hospital showed he was not driving under the influence of liquor.

Kerala Pradesh Congress Committee (KPCC) president K. Sudhakaran accused Mr. George of attempting to disrupt the protest and ‘misbehaving’ with women party workers. He said the actor was drunk and criticised the police for not taking action against him. Women workers would file a complaint against the actor, he said.

Mr. George said he was enraged by many motorists getting stranded for over an hour on the NH bypass. “Among the people inconvenienced were patients, including a child who was being taken to hospital for chemotherapy. I did not speak rudely to any woman,” he said.