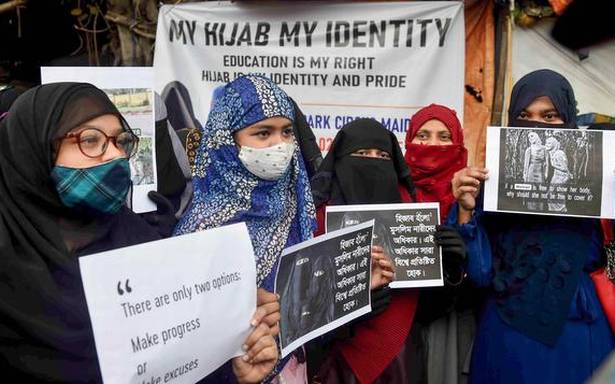 The ban on hijabs in classrooms and campuses in Karnataka is a hate crime and an attempt to impose apartheid on Muslim women, says an open letter endorsed by nearly 2,000 feminists, democratic groups, academicians, lawyers and individuals.

The open letter has sought stern action against individuals and organisations behind the mob attack on a hijab-wearing woman in Mandya. It urged governments across the country to alert police, and the public to deter any attempt to intimidate hijab-wearing women.

“The Hindu supremacists lynch/segregate/boycott Muslims on various pretexts — beef, Muslims’ collective prayers, azaan, the skullcap, Urdu language. Hijab is only the latest pretext to impose apartheid on and attack Muslim women,” reads the letter that also likens the events unfolding in Karnataka to the online “auctions” of Muslim women.

The letter has been endorsed by over 130 groups across 15 States, including the All-India Democratic Women’s Association, All-India Progressive Women’s Association, National Federation of Indian Women, Bebaak Collective, Saheli Women’s Resource Centre, Forum Against Oppression of Women, People’s Union for Civil Liberties, and Dalit Women’s Collective, among others. Signatories also include Uma Chakravarti, historian; Nivedita Menon, academic; Susie Tharu, writer and activist; and Vrinda Grover, senior lawyer. Their statement warns that hijab could be the next pretext for mob attacks on Muslims as was evident from the video from Mandya in Karnataka, in which a saffron-stole wearing mob of men could be seen surrounding a hijab-wearing Muslim woman and heckling her.

They underline that the Constitution mandates that the schools and colleges nurture plurality, not uniformity, and that is why Sikhs were allowed to wear turbans in classrooms and even in the police and Army, and Hindu students wear bindi/pottu/tilak/vibhuti with school and college uniforms.

Earlier, the Bharatiya Muslim Mahila Andolan (BMMA), in a statement, appealed that singling out Muslim women must stop and said that while “social reform in Muslim societies is of utmost importance, the current discrimination in the name of hijab is outright violation of Constitutional principles.”