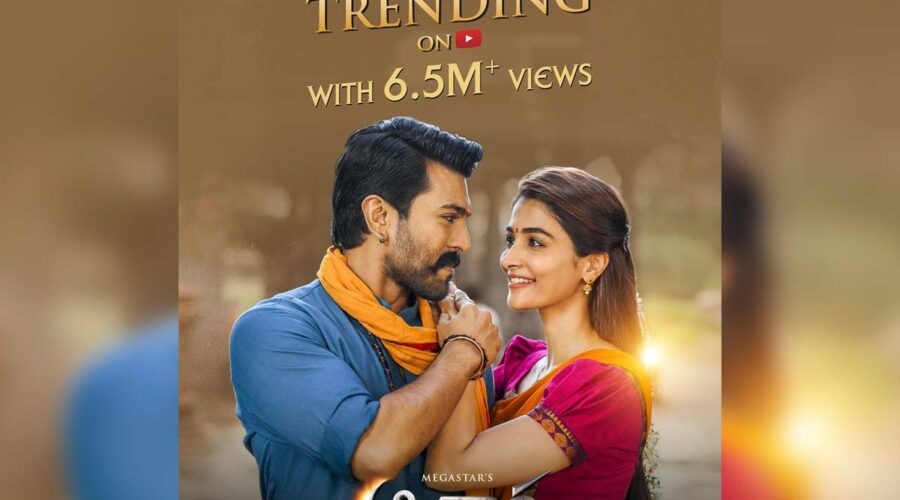 Mega Power Star Ram Charan and Pooja Hegde are coming together with an upcoming film Acharya which has Megastar Chiranjeevi and Kajal Aggarwal in the lead roles.  Recently the makers of Acharya released the Neelambari song that features Ram Charan and Pooja Hegde, and the song  is crooned by Anurag Kulkarni and Ramya Behara. The second single from Chiranjeevi starrer is  winning the heart of the music lovers. Ram Charan and Pooja Hegde steal the show with their mesmerising chemistry in this song. The song is striking a chord with  the music lovers right from the first beat.  Now according to the latest report, Acharya’ Neelambari song is  trending on YouTube with 6.5M+ views.

The song is sung by Anurag Kulkarni and Ramya Behara in their beautiful voices and the lyrics are written by Ananth Sriram. Mani Sharma has composed the music.

Chiranjeevi and Pooja Hegde starrer  Acharya is a social message oriented movie which is helmed by Koratala Siva who is popular for delivering blockbuster movies  Janatha Garage and Bharat Ane Nenu.

Acharya  is bankrolled by Matinee Entertainment and Konidela Production Company. It  is scheduled to release in theatres on 4th February 2022. Besides Acharya, Ram Charan is also waiting for the grand release of SS Rajamouli’s RRR co-starring Jr NTR.

11/12/2021 India Comments Off on Acharya Neelambari Trending on YouTube with 6.5M+ views
India