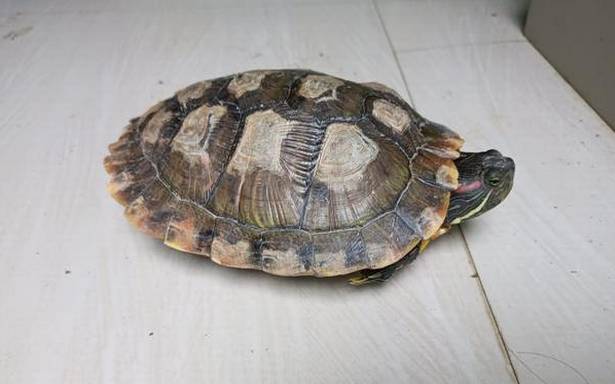 The red-eared slider turtle, which is banned in several countries, poses threat to other endemic local species

The accidental finding of a red-eared slider turtle recently from the Malankara dam in Idukki has raised concerns that the invasive species has reached the water bodies in the district, posing a threat to other endemic local species.

The turtle is also known to be a carrier of human-infected bacteria such as salmonella, and countries such as the U.S. and Australia have imposed strict regulation on its trading and import. Though a favourite among pet lovers, it was first observed in private aquariums in the State.

The turtle in the Malankara dam was spotted after it was trapped in the net while fishing by a local resident. It was later moved to the forest range office at Muttom to be handed over to the Kerala Forest Research Institute (KFRI) at Peechi.

The species was first found in the State at two locations in Thrissur in 2018. In February last, its presence was noticed in Thrissur in small private waterbodies as well.

T.V. Sajeev, senior principal scientist KFR, told The Hindu that the presence of the turtle in a reservoir posed a larger threat. Though they can be easily trapped in small waterbodies, it is not the case in larger waterbodies such as reservoirs.

Their population can also multiply in a short period. Due to its invasive nature, the local habitat

of other species may soon disappear, said Mr. Sajeev, adding that there may be more of the species in the dam.

The Forest Department officials have alerted farmers in the area about the presence of the turtle and directed them to provide timely information on likely sightings.

A native of the southern U.S. and northern Mexico, the red-eared slider turtle is banned in several countries. It is enlisted in the 100 most invasive species in the world. The turtle can grow up to about 33 cm long, with a life span of close to 30 years.