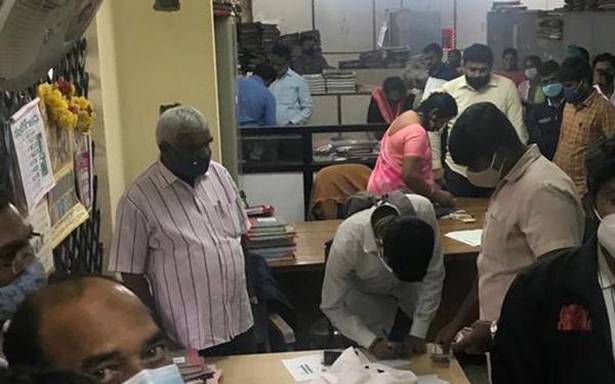 Most departments at the head office covered; raids expected to go on for a week

Nearly a hundred sleuths from Anti-Corruption Bureau (ACB) launched a surprise and extensive raid on Bengaluru Development Authority (BDA) at its head office in the city on Friday afternoon.

The raids have covered most departments of the Authority, including wings of all four Deputy Secretaries, who are key to running of the organisation as well as land acquisition and engineering departments. ACB officials have taken control of most of the offices, especially the record rooms and archives, most of which are still not digitised.

Officers were not allowed to go out, sources said. “We have taken a search warrant from the court for one week. We will extend it if need be,” a senior ACB officer told The Hindu, indicating that the raid would be extensive and is expected to go on for at least a week.

The raids come close on the heels of Chief Minister Basavaraj Bommai, who also holds charge of Bengaluru Development, criticising the BDA at a recent review meeting. The CM is also under fire over the alleged ‘bitcoin scam’ from the Opposition, who have claimed that the scam was “covered up” when he was Home Minister in B.S. Yediyurappa’s cabinet.

Incidentally, BDA Chairman and BJP MLA S.R. Vishwanath has himself held multiple press conferences over the last few months alleging widespread corruption in the Authority. The raids, led by three Superintendent of Police rank officers, were based on information of “widespread and large-scale irregularities” in the BDA, said the ACB in a press release.

Sources in ACB said that the agency had received multiple complaints alleging corruption in the Authority and the raids were not linked to any one complaint in particular, but were “all encompassing” and would review all records, cross checking documents on a host of complaints and tip-offs.

“We have credible information on irregularities and corruption in allocation of alternate sites, developed land as part of the compensation for land losers and in approvals given to layouts. We have also uncovered a layout where most of the sites seem to be allotted to BDA employees themselves,” said a senior ACB sleuth leading the raids. He alleged that BDA officers were trying to evade cops on specific files saying that they were missing.

M.B. Rajesh Gowda, Commissioner, BDA, described the raids as a “routine affair” and said the Authority will ensure full cooperation to ACB sleuths. “ACB will be investigating specific cases based on complaints or tip-offs. Let them carry out their probe. But as an organisation, BDA is in need of reform. It is high time we digitise all record keeping and not only fill vacancies, but also augment the strength of the organisation,” he said.