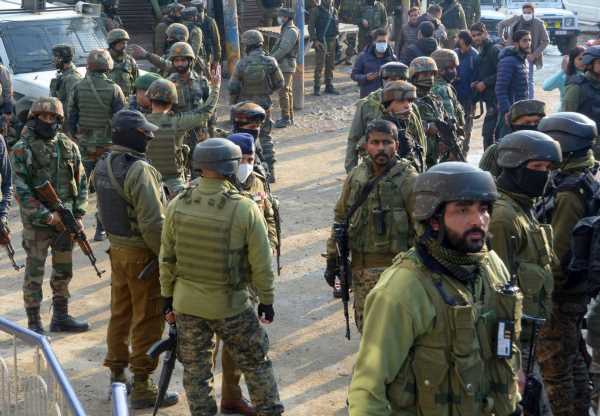 After a year, a father’s hope of finding the body of his son, Shakir Wagey, who worked with the Territorial Army and was killed by terrorists, was rekindled on Wednesday when the army recovered a decomposed body near a mobile tower in this district of south Kashmir.

“I am sure it is his body. The structure of his feet is same as mine and the hair is also similar,” says 56-year-old Manzoor.

His family had last month observed Shakir’s first death anniversary at their village near Reshipora, 15 km from the main district of Shopian in volatile South Kashmir. The soldier was the sole breadwinner of his family.

Talking to PTI, Manzoor said it seemed that his son’s body was buried somewhere else and was later dumped near the mobile tower where it was found.

The decomposed body was recovered by the 34 Rashtriya Rifles after receiving information that a body was found wrapped under a canopy near the mobile tower.

The body was handed over to local police who sought a team from neighbouring Anantnag district to collect the DNA samples and match it with those of the family members. The skeletal remains were taken to Srinagar for the DNA tests. Manzoor was also taken to Srinagar, a family member said.

“I am sure that it is his (Shakir) body but let the legal action be over. After that I will bury him with all rituals,” a sobbing Manzoor told PTI.

Since August 2 last year, when Shakir was abducted and believed to have been killed, the Wagey family faced other tragedies. Manzoor’s elder son, Muzzafar, a truck driver, met with an accident and suffered a permanent disability.

Manzoor’s other son, Shahnawaz, is studying in the second semester of bachelor of business administration.

“He (Shakir) had a surgery on his foot and after we washed the body, the marks of stitches were still there. And the kada in his right arm was also there,” Shahnawaz told PTI.

Shakir, posted with the 162 battalion of the Territorial Army, attached with Jammu and Kashmir Light Infantry, was going to the army camp at Beehi Bagh from home when terrorists abducted him from a nearby apple orchard. Next day, his car was found burnt and later, his blood-soaked clothes were recovered, an army officer said.

Initially, it was presumed that Shakir may have joined ranks with a terror group but later Shakoor Parrey, an informer, who turned rogue, and a self-styled commander of banned Al-Badar terror group, claimed responsibility for his killing, the official said.

Later, during an anti-terror operation, 44 Rashtriya Rifles ensured a surrender in August last year of an Al-Badar terrorist, Shoaib, who told the investigators that Shakir was killed by Parrey and buried the body at an undisclosed location. The army had dug at least 27 places during the past year, the official added.

Shahnawaz said that his father had to spend a fortune on offering the last prayers of Shakir. “He (Manzoor) used to wake up during the night crying for his son. After all, bhai (brother) was a ray of hope in their old age. Now I am trying to live up to their expectations,” 20-year-old Shahnawaz said.

At least three terrorists, arrested or surrendered, have told investigators that they had tortured Shakir and later on Parrey killed him and disposed of his body, the official said.