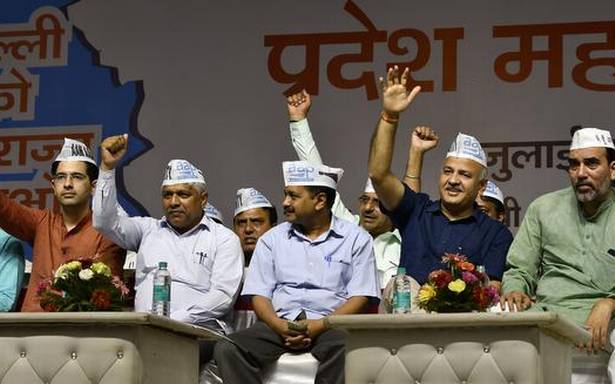 People of Punjab trust Arvind Kejriwal and want the Delhi model of governance to be emulated in the state, AAP leader Raghav Chadha said on Thursday, claiming that his party will form the next government in the State with “outright majority”.

The 32-year-old leader, who is considered to be a confidant of the Delhi Chief Minister and AAP national convenor, said the party’s Chief Ministerial face for Punjab will be announced at the right time.

Mr. Chadha claimed that the people of Punjab were fed up with traditional political parties like the Congress and Akali Dal and wanted to give a chance to the Aam Aadmi Party.

Punjab assembly polls are due early next year.

“Wherever we go in Punjab, we find that there is a disenchantment of people with all traditional political parties. People hate the Akali Dal and they feel betrayed by the Congress. Everywhere there is a sentiment that one chance be given to the AAP and Arvind Kejriwal. It is all pervasive,” Mr. Chadha told PTI in an interview here.

Mr. Chadha said the people of Punjab “love and trust” Mr. Kejriwal and want the “tried and tested” Delhi model of governance to be replicated in the state.

“People of Punjab want the Kejriwal model of governance which he has shown in Delhi to be emulated and replicated in Punjab,” added Mr. Chadha.

Mr. Chadha claimed that the nearly seven years of the AAP government’s track record in Delhi will “play heavily on the minds of the Punjabis” and exuded confidence that they will vote for the AAP.

Asked about the delay in the announcement of AAP’s Chief Ministerial face for Punjab, Mr. Chadha termed it as “matter of our political strategy.” However, he called Punjab AAP chief Bhagwant Mann as the “backbone” of the party in the State.

Replying to a question on Punjab’s political parties targeting Mr. Kejriwal over his poll promises, Mr. Chadha said, “We are making promises which we can fulfill and all these are doable promises.” During his visits to Punjab, Mr. Kejriwal has already promised up to 300 units of free electricity for each household, 24-hour power supply, free treatment and medicines at government hospitals and ₹1,000 per month for women if his party comes to power in 2022.

Attacking the Shiromani Akali Dal, Mr. Chadha claimed that people do not “trust” the Badals.

Kejriwal keeps up attack on Channi

Delhi Chief Minister Arvind Kejriwal on Thursday kept up the attack on his Punjab counterpart Charanjit Singh Channi over the “kale angrez” jibe, saying he may be dark-complexioned, but his intent is clear and he doesn’t make false promises.

Mr. Kejriwal also accused the Punjab Chief Minister of abusing him for promising ₹1,000 a month to the women in the State if the AAP was voted to power.

Referring to the AAP, Mr. Channi had said these “kale angrez” are trying to take over Punjab after “chitte angrez” (British) were ousted from the country.

The AAP leader will be in Pathankot on Thursday and lead a ‘Tirangaa Yatra’ there.