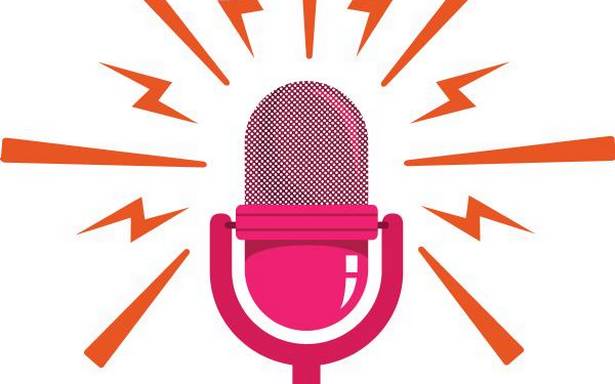 Listen to folk tales, the history of India’s space programme, and the story of the ta-dum sound that introduces Netflix

After a year of online classes and kids glued to screens of various kinds, give digital fatigue the boot this summer holidays. Introduce your children to podcasts.

Parents who are dipping their toes into this auditory world for the first time, don’t worry. As Kitty Felde, award-winning journalist and host of Book Club for Kids, suggests, try a ‘podcast tasting’. “Listen to one episode every night from a different podcast [and] see which one your child likes. Which one do you like? Make a date to listen together: in the car, at bedtime, while walking the dog together. That podcast can be a jumping off place for a longer discussion between you and your child about topics you never even imagined.”

Baalgatha, a mix of contemporary tales and stories from the Panchatantra, Jataka and Hitopadesha may be the most well-known from Gaathastory’s bouquet of podcasts, but its selection for pre-teens is picking up too. “Veergatha honours the National Bravery Award winners and others who have done courageous deeds”, says Bengaluru-based Amar Deshpande, who started the platform with his wife Mrunal. What is common to all the content is their intention that “every story should have a moral” and an India connect. “We have a library of about 4,000 curated stories that we rewrite and edit, and correlate to topical events,” he says, adding that the aim is to educate while bringing in different elements.

New seasons of all their podcasts out this month.

How do you tell your child what’s going on in the world? Should you even? Well, it is not too bad when a kid explains things. New Delhi-based Leela Sivasankar Prickitt, 8, with a little help from her mother, Lyndee, discusses everything from planes powered by ‘water’ to less kid-friendly topics such as Black Lives Matter. What makes it fun are the sound effects (honking cars and planes taking off) accompanying each bulletin. Listening to other young news correspondents from across the world is an added perk.

Go beyond Captain America and Thor. This Spotify Original Hindi daily podcast (with some English), produced by NK Productions, talks about the superheroes of Indian mythology — from stories about Lord Rama, Hanuman, Karna and Draupadi to lesser-known ones of heroes such as Parashurama and Sugriva. The podcast which moves at a good pace, uses storytelling; the narrator does different tones depending on the character, meaning it’s sure to engage the kids. Think of it as listening to those Amar Chitra comics you grew up with, but with the added bonus of sound effects.

Narrated by story writer and storyteller Sameer Goswami (from Madhya Pradesh), the podcast celebrates Hindi literature. Listen to works by celebrated writers like Premchand, as well as translations of stories by writers like Leo Tolstoy and Anton Chekhov. This is a great way of getting introduced to books in other languages, and reading listeners’ comments — such as “It has made me appreciate the vast medium of Hindi literature in a medium I enjoy” and “I always wanted to have good quality readings of classic Hindi literature. I am amazed no one has thought of this idea before” — I must agree.

A curated collection from the archives of Radiolab, a Peabody-winning show created in 2002 by Lebanese-American radio host and producer Jad Abumrad, Radiolab for Kids comprises family-friendly content. If your child has ever asked you, ‘What do dogs see when they look at the rainbow?’, this is where you will find the answer.

“I was surprised to find that dystopian novels are so popular, but an eighth grade girl explained that the books had strong female protagonists and all the boys in the books treated her with respect. As opposed to the boys she went to school with,” says US-based Felde. This is just one of the many things she learnt over the course of 117 episodes (and nearly 100 bonus episodes) of Book Club for Kids. The podcast brings together middle schoolers (“our sweet spot is grades 5 to 8 for our book discussions”) who talk about a book they have read, what they liked or disliked about it, and how it made them feel. The show also features celebrity readers. “For example, we had an FBI agent read a spy book and a retired baseball player read a book about baseball cards.”

Children anywhere in the world can participate in the podcast. bookclubforkids.org

The Unexplainable Disappearance of Mars Patel

Described as Goonies meets Spy Kids meets Stranger Things, this Peabody-winning scripted American mystery podcast, created by Blobfish Radio, is performed by preteen voice actors. Follow along as 11-year-old Mars Patel and his friends JP, Toothpick and Caddie, set out to solve the mysterious disappearance of their friends. The clues all seem to point towards tech genius Oliver Pruitt, whose podcast also comments on their quest. Podcast transcripts, instant message threads, emails and newspaper articles are used to construct the mystery. Parents have said that it’s not just entertaining for the kids but for them too.

Hercules, King Arthur, Baba Yaga… host Jason Weiser delves into their stories on this podcast. These are tales that most of us familiar with, but their origins may still surprise you. While all the stories are sourced from folklore across the world, they are reworked by Jason and his wife, Carissa, for today’s times. Deshpande, who recommends it, says, “It’s very well produced and narrated and has a huge number of positive reviews on Apple Podcasts.”

A fast-paced, fun-filled ethics podcast for kids and their parents, it asks questions that children may be all too familiar with, such as ‘Do you always have to keep a secret?’, ‘Why is your room so messy?’, or ‘Is it fair to punish the whole class?’. The episodes are presented by Australian science journalist Carl Smith, actor Molly Daniels and resident philosopher Dr Matt Beard in a storytelling format.

How did India’s space programme start? Who dreamt of missions to space in an India that was barely a decade into Independence? Narrated by the inimitable cricket commentator-host Harsha Bhogle, the 12-episode podcast is equal parts history lesson and thriller. Created by Mumbai-based media company All Things Small, co-founder Gaurav Vaz says, “We realised India’s foray into space hasn’t really been chronicled. There is no single place that you can go to and find all of this data.” The English may be a little hard for really young children, but Vaz says, “The minute they start learning science and history in school, they can consume a podcast like this. You’re taught about India’s freedom fight, the British rule, about the solar system and astronomy.” Season 2 is currently in the works.

This comes highly recommended by Mae Mariyam Thomas of Maed in India, the podcast that features India’s indie musicians. “The wonderful thing about Geek Fruit is that it’s a space for people to be proud to be a geek,” she says. Started in 2015 by three friends from Mumbai — Jishnu, Dinkar and Tejas — with the idea of building a community of geeks, tune in to catch the trio talk about all the things we love to watch and dissect, from Tintin and Star Wars, to Avengers: Infinity War. Fair warning: they don’t claim to be experts, just passionate fans. So don’t lose your cool if someone wonders if Tintin is from Belgium.

Echoes of India: A History Podcast

This podcast, hosted by Anirudh Kanisetti, a geostrategy researcher at Bengaluru’s Takshashila Institution, describes itself as a history podcast by “Indians, about Indians and for Indians”. He started it, as he told The Hindu, because “I became increasingly convinced that history shouldn’t be confined to books”. What’s the one thing your textbooks don’t have? Sound effects. These, along with Kanisetti’s detailed narrative, will transport you back in time to places like Puhar, the Tamil trading city that has been sung for thousands of years, or help you experience the sights and sounds of ancient Ujjain.

Hosted by journalists Padmaparna Ghosh (Dublin) and Samanth Subramanian (London), this podcast uses interviews, anecdotes and research to narrate stories that blend science, culture and the history of India. Learn about when the Constitution was under attack from natural causes, the Ig Nobel Prize (does it have scientific utility?), the diet followed by the Indian Army and more. Recommended by children’s author Bijal Vachharajani, she says, “This podcast is a good mix of science and reportage.”

This long-running, sound-rich podcast hosted by American radio producer Roman Mars focusses on the unnoticed architecture and design that shapes our world. Over 437 episodes (and counting), learn about the vault built in the remote Norwegian archipelago of Svalbard, which contains seeds of virtually every edible plant on Earth, or the movie-watching experience at the first megaplex in the US, the AMC Grand 24 in Dallas, in 1995. Also recommended by Vachharajani, she says, “I love podcasts that have fantastic reporting and stoke curiosity.”

Stuff You Should Know

Hosted by Josh Clark and Charles W ‘Chuck’ Bryant, former writers at the popular How Stuff Works platform, this podcast (with episodes that can go up to an hour) talks about all the things you’ve probably wondered about at some point — from ‘How soap works’ to more serious topics like ‘How does immigration work’. They also have quick takes, titled Short Stuff, which clocks in at a much shorter 20 minutes. Here, you can brush up on petrichor (that smell of earth after it rains) or how every snowflake is unique. The popularity of the podcast is such that it has spawned a TV show and a live tour across US cities.

Join the US-based Green brothers — authors and YouTubers Hank and John (of The Fault in Our Stars fame). The banter and shared memories create a wholesome atmosphere as the duo responds to listeners’ questions. Highlights include ‘Why do things burn when not coming into the atmosphere but not when leaving?’ and ‘Does milk expire when it’s inside a cow? Each episode ends with news about their personal passions: planet Mars and the latest on English football club AFC Wimbledon.

There are sounds that you’ve heard so often that you may not even register them anymore. For instance, the iconic music for 20th Century Fox, or the ‘ta-dum’ that launches Netflix. This podcast is fascinating because it answers the question, ‘What is the story behind that sound?’ It is hosted by US-based Dallas Taylor, who is also creative director of Defacto Sound, a sound design company working on television, film, and games. Vaz (who recommended it) is a listener because learning the “stories behind sounds is really special".

Created by American musician, composer and podcaster, Hrishikesh Hirway, this podcast has musicians “take apart their songs and, piece by piece, tell the story of how they were made”. Facts are interspersed with song clips, anecdotes and sound bytes. Featuring work by artists from across the world, I particularly enjoyed ‘Father and Son’ by Yusuf Islam (Cat Stevens), ‘Closing Time’ by Semisonic, and Robyn’s ‘Honey’.