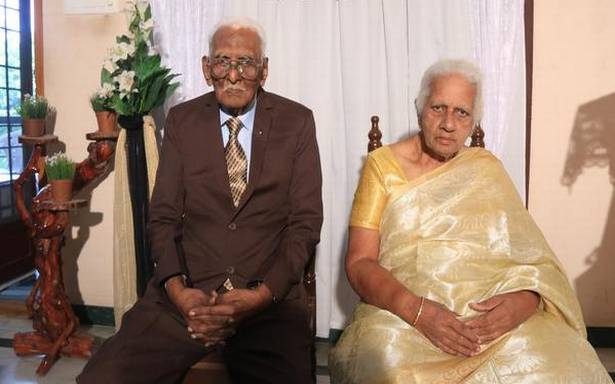 This Mugalivakkam resident has turned 100

Saturday began for Messiah Das with his family presenting him a new suit, for it was his birthday and a special one at that. A printer by profession, an avid footballer, a health buff and a stickler for time, this Mugalivakkam resident turned 100 with close family members wishing him early in the day.

“He was so happy that we all came to wish him. His three children, their spouses and grandchildren all gathered to wish him. It was a busy day for us since we were preparing for the party. But it was fun talking with him and listening to his stories,” said granddaughter Karen Roshie, who is pursuing her Masters in English literature in a city college.

The family held a simple party in the evening with a cake and ended the day with some biryani, Mr. Das’ favourite dish. “He has no problem eating rich food since he exercises well and does everything on time. If we eat late or skip a meal, he will ensure that we don’t repeat it,” she added.

Mr. Das was born on November 21, 1921, at an estate in Munnar. He then returned to Kanniyakumari, where his father Needhiyudiyan Samuel taught him Varma treatment and encouraged him to be active in sports. He learnt to play football from his father and won prizes in various tournaments. “He was saying he missed the opportunity to go on to become a professional footballer because his mother would not let him go to Mexico for training,” she added.

He later moved to Sri Lanka where he worked in various printing presses and came back to Nagercoil where he ran the Quality Printing Press till his 80s.