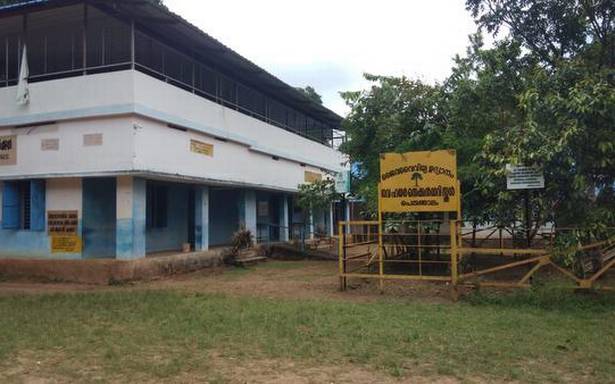 While several schools across the State have turned smart under State’s Public Education Rejuvenation Mission, Government Higher Secondary School, Peringalam, is an exception. Plagued by many problems, including staff shortage and inadequate infra, the only high school in the Munroe Thuruthu panchayat is staring at an unpromising future.

The 100-year-old school is located in Peringalam, the remotest part of the panchayat with no motorable roads. Students and teachers have to first commute by a canoe and then walk the nearly 2-km distance to the school, a daily task that can be very hard considering the topographical features of the island. In the absence of basic amenities, including connectivity, the school has been struggling to provide quality education to its students.

While the school has around 200 students in the higher secondary segment, the total strength from Class 1 to 10 is only 65. “Ninety-nine percentage of our students come from underprivileged families and the school is their only hope for a better future,” says M.R. Purushothaman, headmaster.

The population of the island has been shrinking over the years with several families migrating to other parts. “Earlier hundreds of students used to attend the school and now the numbers have come down drastically. We recently visited the homes of all students and majority of the parents are Mahatma Gandhi National Rural Employment Guarantee Scheme workers. They cannot afford other schools and they seemed extremely distressed about the current situation.”

Mr. Purushothaman adds that there won’t be enough teachers to handle classes when the school reopens. “Last year the students had to attend the exams without classes and this time we have managed by providing the online class links of a school in Malappuram,” he says.

A small bridge used to connect Perungalam to the mainland earlier. But it was washed away in the floods of the 90s, cutting off all connectivity. Contractors are not very keen on taking up any work in the island as they will have to ferry the material in boats and later carry it to the site with the help of headload workers.

“The last LDF government had announced the construction of Konnayilkadavu bridge, but the work has not started. A bridge and connecting roads can end the woes of the islanders and offer a new lease of life to this 100-year-old school,” adds Mr. Purushothaman.

09/09/2021 India Comments Off on A school marooned, both offline and online
India