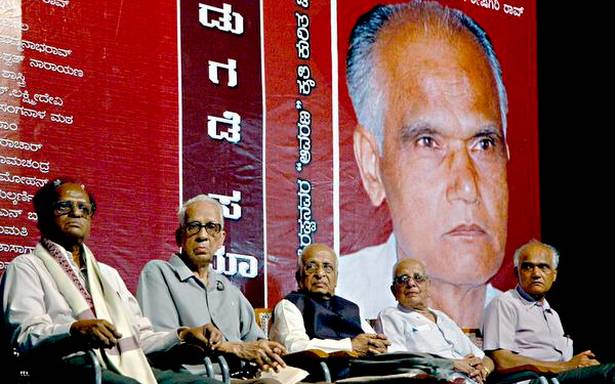 He saw no difference in creative writing and activism: Baragur Ramachandrappa

Chandrashekhar Patil always carried with him the essence of North Karnataka in general and Dharwad in particular. He was part and parcel of Dharwad for almost four decades and it was here that the writer, the poet, the satirist, the playwright, and the fighter in him was nurtured.

Champa, better known as ‘C.B.’ short for his initials, among his friends in his home town that comprised Giraddi Govindraj, Somashekhar Imrapur, Siddhalinga Pattanashetti, P.M. Hegde, M.M. Kalburgi and others, began his poetic journey at the historical Karnatak College in Dharwad, where V.K. Gokak inspired him to pen poems.

After his diploma in English in Hyderabad, Champa did his M.A. from Leads University and returned to Dharwad to serve as English teacher at Karnatak University, which he subsequently headed.

It was here that he started the little magazine Sankramana, with two other friends Giraddi Govindaraj and Siddalinga Pattanashetti in 1964. Though the two disassociated midway, Champa continued to single handedly edit and publish the magazine for over 50 years till recently, perhaps making it the longest surviving little magazine of Kannada.

However, many of his contemporaries lament that activism perhaps robbed Kannada of great creative works. “Playwright Sriranga once exclaimed that Champa made the best use of language for a play. He wanted to write a full-length play on Basavanna and explore the medium more seriously, but that never happened. Perhaps his activism veered him away,” observed critic K. Marulasiddappa.

Baragur Ramachandrappa observed that Champa’s creative writing was also an immediate reaction to something that bothered him — in that way he saw no difference between creative writing and activism. “But his plays like Appa and Tingara Buddanna transcend this,” he observed. Champa continued writing poetry throughout his life.

Perhaps Champa’s biggest contribution to Kannada literature was the little magazine Sankramana he edited for over half a century. “So many writers came to light through Sankramana. His editorial ‘Champa Column’ was an institution in itself. No editorial was that forthright,” said Mr. Marulasiddappa.

01/10/2022 India Comments Off on A product of Dharwad, Champa had with him the essence of the town
India