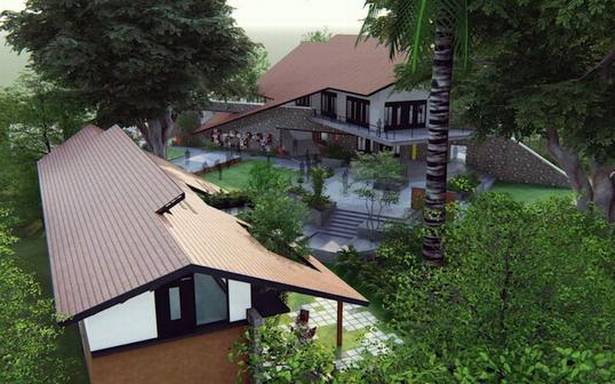 It was during an encounter with a visitor that Vaikom Muhammad Basheer famously described himself as the ‘Sultan of Beypore’, showing his love for the port town that had been his home after marriage. Two decades after his demise, the plan to build a memorial there for the writer is now taking baby steps.

Architect Vinod Cyriac, who was assigned by the Kozhikode Corporation to prepare a blueprint for the project, told The Hindu on Saturday that the newly constituted council was expected to take the project forward. “The plan for the Basheer memorial cultural complex was approved by the previous council at the fag end of its tenure. We were recently informed that a meeting will be held next week to discuss the future course. The design is ready and its execution needs to be discussed now,” he said.

The blueprint is titled ‘Akashamittayi’, the name Saramma and Keshavan Nair proposed for their child in Premalekhanam, one of Basheer’s classic works. The plan is to have a cultural hall, library, research hall, amphitheatre, park, auditorium and cultural centre along with a ‘Garden of Letters’. A statue of the writer in the front yard, a hall showcasing his works, and information on the history of Beypore may also be highlighted. There will be a walkway to the memorial from the entrance. A reclining chair and a gramophone, things that the writer came to be identified with, may be placed in the front yard.

K.J. Thomas, cultural activist, who was a functionary of an advisory committee formed in 2008 to build a memorial for the writer, said the government had earlier allocated ₹50 lakh for that project. The panel was chaired by the then Minister for Culture M.A. Baby. Mr. Thomas said the State government, however, took back the money in 2018 as land could not be identified for the purpose. “The new project is part of the State government’s proposal to have cultural complexes in all districts. The authorities may have to also link it with other tourism projects so that visitors get access to the place,” he added.

According to sources, a community hall on B.C. Road in Beypore will be demolished to create the new structure. Over 80 cents of land on the southern side of the hall is reportedly being acquired for the project.