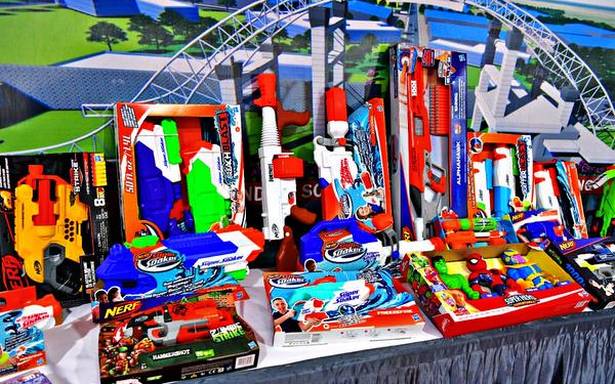 However, the Koppal Toy Cluster, for which ground-breaking ceremony was performed on Saturday by Chief Minister B.S. Yediyurappa, bears little resemblance to the traditional craft that boasts of a Geographical Indication (GI) tag. It will largely manufacture plastic toys aimed at outdoing Chinese toys which till recently dominated the Indian market.

Meanwhile, the traditional Kinnal toymakers have suffered due to years of drought, floods and later COVID-19 pandemic.

The proposed Koppal Toy Cluster, an initiative of Aequs Infra, is expected to attract ₹5,000 crore investment and generate over one lakh direct and indirect jobs in the next five years.

Spread over 400 acres, the cluster is designed to house around 100 toy-making units and offer everything required for the toy manufacturing industry – plastic, steel, electronics and skilled labour. It envisages supporting the entire toy chain from raw material suppliers through manufacturers to the vendors.

It is seen as a major development project that would boost the economy in the backward region. With the new industrial policy in force, the local unemployed youth and entrepreneurs are expected to be put on top priority in offering lands, infrastructure, finance and other government aid and incentives.

As an estimation, Karnataka is the third biggest State in toy manufacturing. Grown at 18% Compound Annual Growth Rate (CAGR) between 2010 and 2017, the State’s toy market is expected to cross 310 million dollars by 2023.

Mr. Yediyurappa, speaking to mediapersons at Ginigera airstrip in the district, said that Prime Minister Narendra Modi would be invited to inaugurate it once the project is ready for operation.

Meanwhile, former Chief Minister H.D. Kumaraswamy, in a series of tweets, sought to remind Mr. Yediyurappa that the idea of the cluster, under “compete with China” initiative, was first presented in his budget and ₹500 crore had been set aside for it.