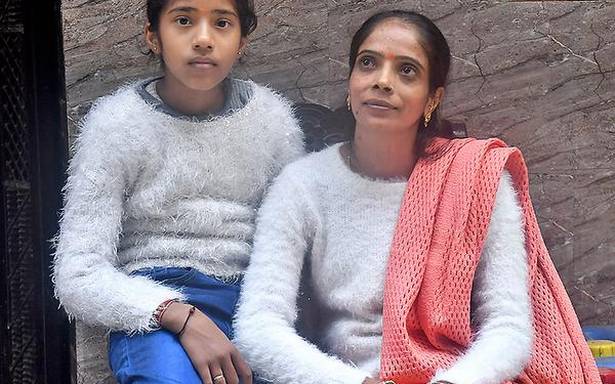 Two months after Arunima Bhattacharjee’s father passed away in May due to COVID-19, she landed in the job her father always dreamt for her — as a law researcher with a Delhi High Court judge. But the 28-year-old lives with the regret that her father got the infection from her.

“We never lived an extravagant life. My father retired from a government job but ensured that all our needs were fulfilled. I wonder how he made it seem like a cakewalk when it’s actually a herculean task, “ said Arunima. “I pay one bill and lose track of the rest. I wonder how he did it”.

Arunima and her mother, Rama, are grappling with the irreplaceable loss. “Our support is gone. I was fully dependent on him [Abhoy] for fulfilling my social obligations. Now all kinds of worries plague me,” said Ms. Rama.

Arunima recalled how her father unfailingly stood by her and comforted her when things turned bleak.

“When I was laid off, he consoled me and asked me to be positive and hang in there. He stonewalled peoples’ over-arching concern about my marriage and always told me to take it easy and not get flustered. The house feels so empty now without him and the family photo will never be complete,” she said, unable to hold back her tears.

Breezer, their dog, sat on his couch. Occasionally clinging to Arunima and her mother Rama. He has also mellowed down after Abhoy’s demise. “My father and Breezer were inseparable. After his death, the latter has become mellow and very anxious if me or Maa are not around,” Arunima said.

Another family in Pitampura is gradually picking up the pieces of life. Satyabir Bhatotia, a retired Deputy Director (Finance) in Haryana government, succumbed to COVID-19 in June after spending two months in Guru Teg Bahadur Hospital. His wife Kamlesh, a government school teacher, daughter Yasha, 30, who teaches in a Delhi University College and her siblings Saumya, 27 and Kartikeya, 24, are trying to deal with the grief.

“The memories are heavy to carry,” said Ms. Kamlesh. “I got married at 20 and he enabled me to complete my education and find a job. Every day, he would drop me and pick me up from work; two hours were set aside for our evening walk together. Now I do not feel like going out,” she said with moist eyes.

Six months after the second wave, when sympathy and visits of relatives and friends have reduced, the families are beginning to feel the impact of their personal loss. Yasha said she feels hurt when people ask them to be brave and remind them that they are all well settled in life. “I find it very insensitive. He was our father; I miss simple things such as the warmth of his hug when I returned from work, “ she said, her eyes welling up.

Few people have the patience to hear you. Not many realise that talking about one’s grief can be therapeutic, Yasha said. The world is the same only her father is missing and every big and small memory hits her hard, she added.

Her brother, however, deals with the loss differently. He does not talk or think about it. “My way of coping is not to account for it,” he said.

Families that suffered during the COVID waves in the last two years are still trying to come to terms with what hit them. Every memory made with their loved ones is treasured and often strike in a flash like a flood.

“From staring at the empty corner occupied by them or the chair they sat on, their smiles and embraces and each gesture of theirs has been snatched away from us,” said Yasha.

Time heals, they say, but healing is not easy either. It takes long to gather yourself and make ends meet again.

Apart from the emotional trauma, the struggles of the bereaved family members are compounded by the delay in receiving the promised compensation from the Delhi government.

It’s eight months since 33-year-old Babli Kumari, lost her husband. He died as a COVID-19 suspect outside a Delhi hospital waiting for treatment. Left without savings or any monetary assistance, it is a hardship for her to take care of their 11-year-old daughter. “I am stressed out but do not talk about it with anyone, other than crying in solitude,” she said.

“My daughter cries that if her father was alive, he would do so many things for her. I put up a brave front for her and explain that I am both, her father and mother now,” said Ms. Kumari, who has applied for one-time compensation of ₹50,000 and monthly assistance of ₹2,500. The sanction has not come through yet.

She needs to submit the positive RT-PCR report of her husband. But since he died following clinical suspicion of infection as the CT scan of his chest indicated, she has no report of his RT-PCR status. “He had a score of 8/25 and we were told he has COVID but no test was done,” Ms. Kumari said.

Incidentally, on April 26 we were witness to Ms. Kumari’s 47-year-old husband, Ved Prakash’s, plight outside a private hospital. He was breathless and denied admission as there was a protocol to be followed. He breathed his last at the fourth treatment facility centre where his family had rushed him to for help on that day.

Ms. Kumari continues to visit the Sub-Divisional Office in hope. “My daughter’s monthly tuition fee is ₹1,500. My brother earns ₹10,000 a month and gives me ₹2,000 from his earnings. How long will this work? He too has a family to look after. Besides, it is tough to survive on such meagre sum,” she said.

For 30-year-old Ruchi Sharma, May 21 is one of the darkest days when her husband died shortly after admission to a hospital. As a single mother she is struggling to raise her son who studies in Class VI. “I spoke with the school management and they reduced his fee from ₹3,000 a month to ₹1,500 per month. But still I could not arrange for the money and an NGO, Bachpan Bachao Andolan stepped in to help. They send me ₹3,300 every month now but it is not sufficient to meet all expenses,” said Ms. Sharma.

She too has applied for the Delhi government’s compensation. “I submitted all documents but the staff got my account number wrong. I have been making multiple visits to the SDM office to get it corrected but to no avail,” she rued.

Despite multiple attempts, a government spokesperson did not comment on the two people not getting the compensation.

Most of the affected family members find their lives shattered and feel demotivated. “Zindagi bikhar si gayi hai,” they say. But then, everybody lives on hope.