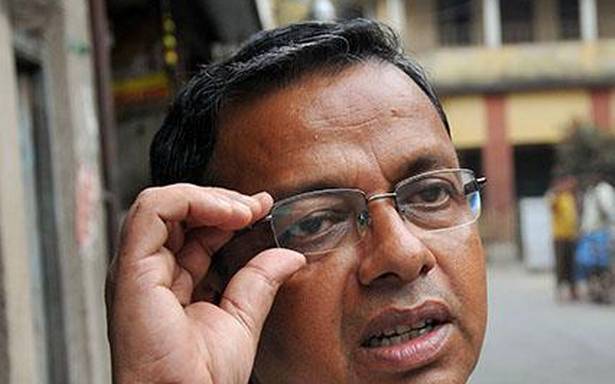 Mahapatra says Bengal govt.’s persistence on continuing cases is an attempt to harass him

Almost nine and half years after he was arrested for forwarding a cartoon of West Bengal Chief Minister Mamata Banerjee, a court in Kolkata has discharged Ambikesh Mahapatra under Section 66 A of the Information and Technology Act, 2000, but the professor cannot heave a sigh of relief as the matter will be still pending before the court.

“To 17-11-2021 for hearing as to whether any case under Section 500/509 of the IPC or any other law can be made out against the accused Ambikesh Mahapatra or whether the accused merits to be discharged from the case,” said a Tuesday order by Subrata Mukherjee, Chief Judicial Magistrate, Alipore, 24 Parganas (South).

Prof. Mahapatra pointed out that the Supreme Court in 2015 had passed a landmark decision striking down the draconian Section 66A of the Information Technology Act, 2000 but he continued to fight the case involving the charge for six long years. Under the IPC, Section 509 pertains to (word, gesture or act meant to insult women) and Section 500 (punishment for defamation).

Prof. Mahapatra had forwarded an email containing a cartoon sequence based on Satyajit Ray’s Sonar Kella, which made fun of Dinesh Trivedi’s removal as Railway Minister and being replaced by Mukul Roy.

“It has been more than nine years that I have been fighting this case for forwarding an innocuous collage or cartoon which was with no evil intention. One of the people charged in the case has already passed away. I do not know how long the case will carry on,” Prof. Mahapatra said.

The professor of Chemistry at the city’s premier university said the West Bengal government’s persistence on continuing the cases against him was an “attempt to intimidate and harass him.”

Not only has Prof. Mahapatra dealt with a long legal battle, but also suffered in other ways, including over his passport extension. He has been denied compensation awarded by the West Bengal Human Rights Commission in August 2012 and upheld by the Calcutta High Court in March 2015.

“The WBHRC had directed disciplinary proceedings against police officers for the manner they acted against me, and the High Court increased the compensation from ₹50,000 to ₹75,000 to account for the legal cost. I am yet to receive the amount from the State government,” he added.

After this experience, Prof. Mahapatra has formed a group called “Aakraanta Aamraaa” or “We the sufferers” along with other victims who allegedly suffered “injustice at the hands of the State”. The collective has more than hundred members now who raise their voice against violation of human rights.