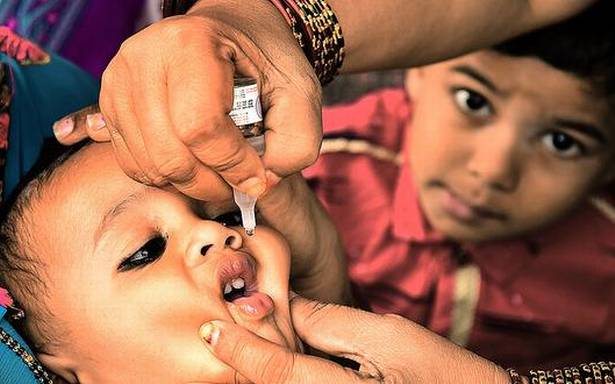 Vizianagaram achieves 99.59% of the target

The first day of the pulse polio immunisation programme covered 97.02% of the children aged below five years in the State targeted as part of the drive on Sunday.

The State has planned to immunise 52,71,504 children as part of the drive and 51,14,532 of them were administered the polio drops at 37,493 polio booths on Sunday, according to the Health Department.

Vizianagaram district has achieved 99.59% of the target while the same for Krishna district was put at 94.99%.

The Health Department has roped in 1,49,977 vaccinators for the programme. On Monday, Tuesday and Wednesday, children who missed the immunisation on Sunday will be administered with the polio drops at their houses.

Governor Biswa Bhusan Harichandan launched the programme at Raj Bhavan on Sunday by administering polio drops to children. He called upon the parents to have their children administered the drops at their nearest centre.

National Disaster Response Force (NDRF) 10th Battalion Commandant Zahid Khan and other officials participated in the drive at Rain Tree Park in Guntur district, adding that the NDRF had undertaken the drive, in association with the Health Department.