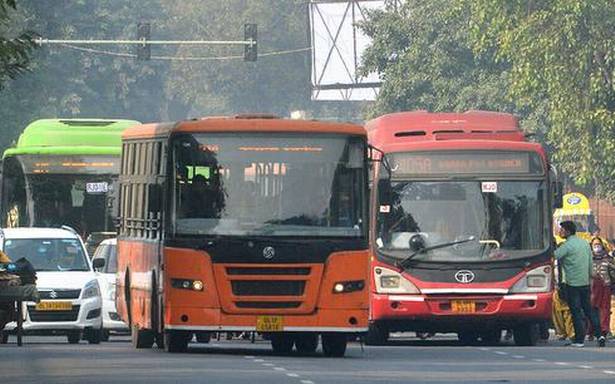 The Delhi Traffic Police on Wednesday said as part of its special drive against errant bus drivers they have prosecuted a total of 94 DTC and cluster buses for various traffic violations, ranging from dangerous driving to lane violation.

JCP (Traffic) Vivek Kishore said they started receiving complaints against buses violating traffic rules and it was observed that a number of drivers of DTC and cluster buses did not ply their vehicles in the designated lanes and also drove dangerously. “Such erring buses also indulge in a number of road accidents,” Mr. Kishore said.

On receiving the complaints, several teams were formed in the three traffic ranges — Western, Eastern and Central — and a special drive was undertaken on January 4 to prosecute the violating buses. In the Central Range, 14 buses were challaned for dangerous driving and 14 for permit violation. “In the Northern Range, 14 vehicles were challenged for dangerous driving, 2 for Supreme Court guidelines violation, 2 for permit violation and 15 for lane violation,” Mr. Kishore said.

Similarly in the Western Range, 13 vehicles were challaned for dangerous driving, 11 for Supreme Court guidelines violation, 6 for permit violation and 3 for lane violation. “In total, 94 buses were prosecuted in the above three ranges during the special drive against errant buses,” the JCP said.

The Supreme Court guidelines violation includes offences such as speeding, crossing the yellow line, among others, officials said.