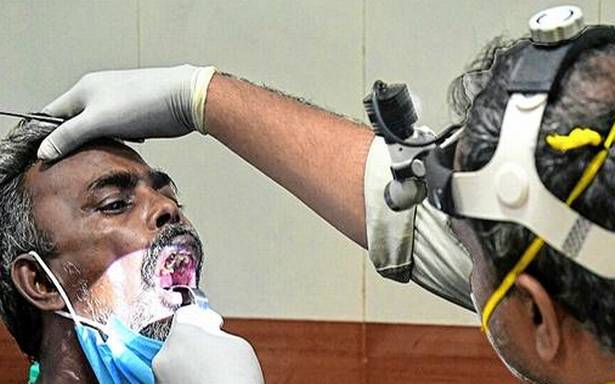 As many as 518 people have been affected by mucormycosis in Tamil Nadu so far, and of these, 17 have died, Minister for Medical and Family Welfare Ma. Subramanian said on Tuesday.

The Minister launched a special mucormycosis screening centre at the Rajiv Gandhi Government General Hospital (RGGGH). Steps are also being taken to establish similar screening facilities in all government medical college hospitals in the State.

He told reporters that the centre would enable the early identification of patients affected by mucormycosis.

“A total of 120 beds have been earmarked at the RGGGH for patients diagnosed with mucormycosis. A similar special ward has already been set up at the Government Medical College Hospital, Omandurar Estate,” he said.

A 13-member committee will look into the causes of mucormycosis, including the role of steroid use in patients diagnosed with COVID-19, and the possible contamination in industrial oxygen, he said.

According to a press release, presently 112 patients with mucormycosis are admitted to the RGGGH. Endoscopic nasal surgical debridement has been performed so far in more than 30 patients, and vision saved in two by administering intraorbital amphotericin injection.

Early detection of mucormycosis has prevented complications and mortality, the release said. At the special mucormycosis screening outpatient diagnostic centre at the RGGGH, patients with early suspected symptoms will be examined by ENT specialists, an ophthalmologist, a general physician, a diabetologist and a nasal endoscopist, while a fungal examination will be done by a mycologist and a microbiologist. Such a comprehensive facility for diagnostic evaluation and further management of mucormycosis is a first in the State, the release added.

The hospital has also installed an LED board to display the health status of patients diagnosed with COVID-19, who are undergoing treatment at the hospital.

The Directorate of Public Health (DPH) and Preventive Medicine has issued an advisory on mucormycosis.

All medical practitioners and institutions have been requested to follow-up all COVID-19 patients after discharge for the occurence of mucormycosis and report cases to local health authorities.

DPH, as part of preventive measures, has advised that the use of steroids should be strictly according to State guidelines for the management of COVID-19 and the duration of treatment with steroids should not exceed 10 days, unless clinically indicated.

Oxygen humidifiers should be cleaned every day and filled with sterile water/distilled water. Appropriate infection control measures should be followed.

At the hospital level, each case of mucormycosis should be audited to identify the source of infection, and infection sites should be tagged.