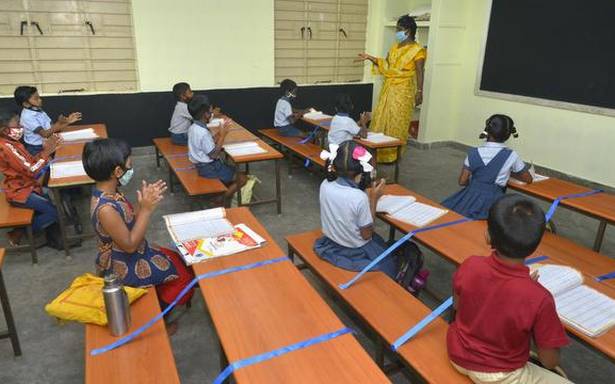 On regular classes from January 18, the Director of School Education said the government would take a decision after analysing the situation

Around 50% of students attended classes when schools in Puducherry partially reopened for academic activities on Monday after a break of more than nine months, due to the nation-wide restrictions imposed to prevent the spread of COVID-19.

The Education Department had decided to conduct classes in Puducherry and Karaikal regions up to noon till January 17 and regular classes from the following day based on the emerging situation.

“Around 40 to 50% students attended on the first day. The presence of students was more in government schools than in private institutions. Schools did not mark attendance as appearance of students will be voluntary,” Director of School Education P. Rudra Goud told The Hindu.

Some parents have requested advancing the opening and closing of primary schools by at least half an hour. Currently, the department has fixed the timing from 10 a. m to 1 p. m., he said, adding that after holding consultations with heads of institutions, the department would take a call on the demand. “We will take a decision on advancing the opening and closing times of primary schools in two to three days. We want things to settle down first,” Mr. Goud said.

On regular classes from January 18, the Director said the government would take a decision after analysing the situation. “If everything goes well, we will go ahead with the plan,” he said.