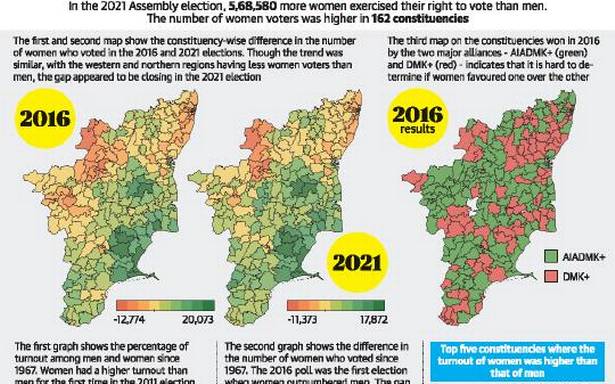 A total of 5,68,580 more women voted than men in 2021, the widest increase in the history of the Tamil Nadu Assembly elections, according to the figures released by the Chief Electoral Officer on Friday.

The number of women who voted began to overtake men for the first time in Tamil Nadu in the 2016 election. The gap then was 3.7 lakh.

It stayed roughly the same during the 2019 Lok Sabha election, too.

According to the revised number released on Friday, the overall turnout in 2021 increased just a notch to 72.81% from the earlier figure of 72.78%.

Although women voters were significantly higher in absolute numbers, the percentage of turnout among women (72.55%) was marginally lower this time than men (73.09%). This is a reversal in trend as the 2011 and 2016 elections witnessed for the first time a marginally higher turnout percentage for women than men.

In absolute numbers, women outnumbered men in 162 constituencies. The widest gap was in Tirupattur in Sivaganga district, where 17,395 more women voted than men.

This was followed by Tiruvadanai in Ramanathapuram district, where the difference was 16,031.

The widest gap on the other end of the spectrum — where men outnumbered women — was at Omalur in Salem district. A total of 11,373 more men voted here.

As shown in the maps accompanying this article, the trend of men outnumbering women among those voted was observed more in the western and northern regions in the 2016 and 2021 Assembly elections.

An observable difference, however, was that women were bridging this gap in many of the constituencies in these regions in 2021.

An analysis of the constituencies won by the alliances led by the AIADMK and the DMK in the 2016 Assembly election, however, showed that it was difficult to determine if women markedly preferred one party to the other. Both alliances had won from constituencies that fell under both ends of the spectrum in terms of the difference in the number of men and women.