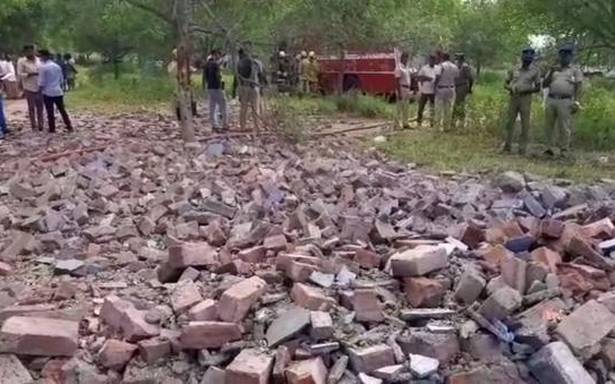 Four workers were killed and two others sustained serious injuries in a blast at a fireworks unit near Sattur in Virudhunagar district on Wednesday.

An official said the workers were filling tubes with chemicals for making ‘bijili’ crackers at Sri Solai Fireworks when a friction caused the blast at 7.20 a.m. One work-shed was razed in the impact. Even before officials could rush to the spot, local residents shifted the victims to the Sattur Government Hospital.

The police have identified the deceased as A. Karuppasamy, 40; K. Senthil, 35; K. Kasi, 40; and S. Ayyammal, 48. M. Muniyasami, 45, of Manjal Odaipatti, who sustained 60% burns, has been admitted to Government Rajaji Hospital in Madurai. J. Saraswathi, 40, of Kombulingapuram, has been admitted to the Tirunelveli Medical College Hospital with fractures in the limbs.

The unit, located at Panaiyadipatti, has been given the licence by the District Revenue Officer. In 2020, the licence-holder, A. Poomari, got it renewed till March 2022.

This is the second accident at a fireworks unit in the district this year. Five workers were killed and seven others injured in an accident at R.K.V.M. Fireworks near Watrap on January 1.