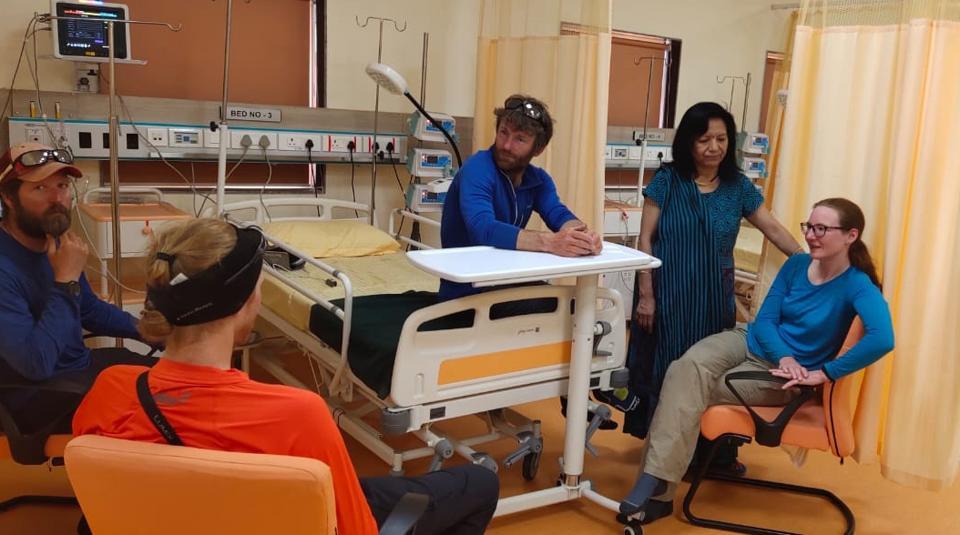 Authorities on Sunday rescued four British climbers stuck near the base camp of Nanda Devi East peak in Pithoragarh in Uttarakhand but eight other mountaineers including seven foreigners, reported missing since May 25 remained traceless, district officials said.

The four mountaineers who were rescued were identified as Zachary Quain (32), Kate Armstrone (39), Ian Wade (45) and Mark Thomas (44). Thomas was the expedition’s deputy leader. They were rescued by one of the two Indian Air Force helicopters which have been pressed into the rescue operation. They were treated for minor health problems at the Pithoragarh District Hospital.

They refused to talk to media persons but were worried about their friends who were missing.

“The rescued four foreign mountaineers were admitted in the district hospital of Pithoragarh but were discharged after minor treatment,” said RC Gautam, sub-divisional magistrate, Munsyari.

But there was no headway in finding the other eight mountaineers including seven foreigners led by ace climber Martin Moran of the UK.

A team of the Indian Tibetan Border Police (ITBP) is scheduled to join the search and rescue operations from Monday.

“A rescue team of the ITBP that was stationed in the Namik Glacier reached Laspa on Sunday and is expected to take part in the search and rescue operations from Monday,” Gautam said.

Earlier on Saturday night, well known mountaineer, Dhruv Joshi who is based in Almora, also left for Munsyari to assist in the rescue operations.

The eight mountaineers including an Indian were reported missing on Friday. They had left Munsuyari on May to scale the 7,434-metre peak and was scheduled to complete the expedition on June 1. The information about them missing was given by a porter Mangal Singh who made his way back from the Nanda Devi base camp on Friday to a Delhi based adventure company which then informed the administration.