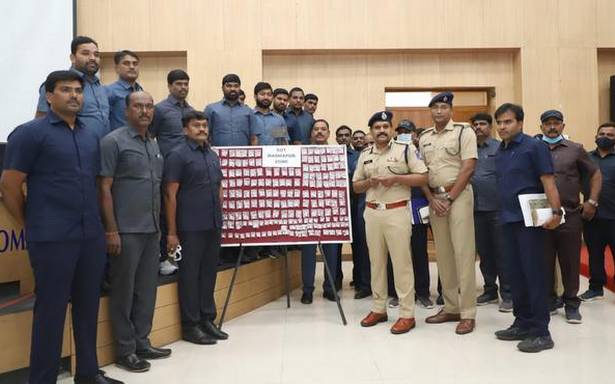 Making it the largest seizure of cocaine in the State so far, the Cyberabad police recovered 183 grams of contraband from drug abusers. A peddler, who brought the consignment to the city ahead of the New Year celebration, and two end-users, were apprehended by the Special Operations Team of Madhapur zone, Commissioner of Police M.Stephen Raveendra said on Thursday.

They also seized 44 MD Ecstasy tablets and three mobile phones, all worth ₹ 26.28 lakh in the grey market. “This is the biggest haul of cocaine to date in the State,” the Commissioner said.

While the main peddler, Jude alias Chris from Goa and a native of Nigeria is at large, the apprehended persons are local peddler Mohammed Ashraf Baig (37), an Arabic tutor from Tolichowki, from whom 181 grams of cocaine was seized, and two consumers, Rameshwara Sravan Kumar (24) from Nizampet and Gorentla Charan Teja (27) of Kondapur. One gram each was seized from their possession.

Acting on a tip-off, the sleuths of SOT, apprehended Sravan Kumar and Charan Teja from their flat at Ramky Towers, Gachibowli, on December 22. Later, based on the information shared by them, Baig was apprehended and 181 grams of cocaine and 44 MD Ecstasy tablets seized.

“Baig is procuring a huge quantity of cocaine from Jude, in view of New Year celebrations,” the officer said.