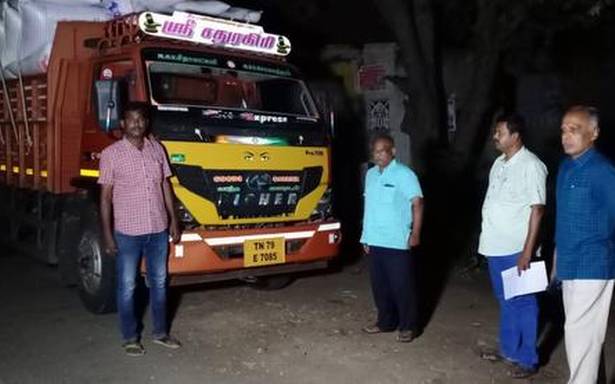 Fourteen tonnes of paddy, supplied by Tamil Nadu Civil Supplies Corporation, that was being smuggled to a private mill in Sankarankoil from a registered hulling mill in Rajapalayam was seized in the small hours of Tuesday.

Acting on a tip-off, a team of revenue officials kept a watch on the rice mill on Tenkasi Road after they got an alert about smuggling of rice.

TNCSC officials had supplied 44.5 tonnes of paddy to the mill on Monday and the mill that has been registered with TNCSC has to hull it and hand over 68% rice of the supplied quantity of paddy. “Such registered mills should not handle paddy from private people,” an official said.

However, when the officials, including Flying Squad Special Tahsildar, Sankarapandian, Taluk Supply Officers, Ramanathan (Rajapalayam) and A. Gothandaraman (Srivilliputtur) and Flying Squad Revenue Inspector, Vigneshwaran, found a truck leaving the mill around midnight, they followed it stealthily in a car.

After halting at a weighing bridge for weighing the goods, the truck proceeded towards Sankarankoil, when the officials intercepted it.

The driver tried to give a false information that the paddy was procured from a private person. However, he was not able to give any other details.

However, later he reportedly confessed to have brought the paddy from the registered rice mill.

The truck was taken back to the mill where the owner, Siddaiah, was present. Enquiry by the officials revealed that the owner had tried to illegally sell the fine quality of paddy to the private mill.

The officials have recommended to the Collector for further action.