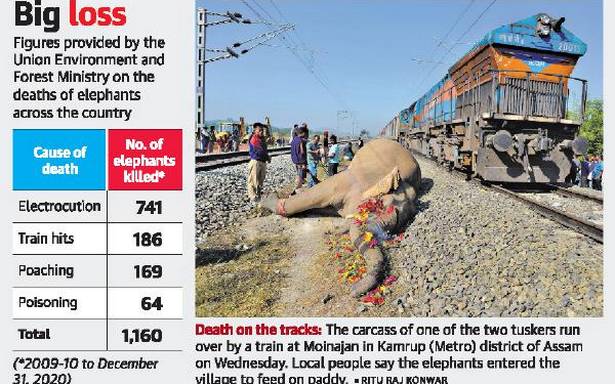 A whopping 1,160 elephants were killed in the country due to reasons other than natural causes in the past 10 years up to December 31, 2020, according to the Union Ministry of Environment, Forest and Climate Change (MoEFCC).

While electrocution claimed the lives of 741 elephants, train hits led to the death of 186 pachyderms, followed by poaching – 169, and poisoning – 64, a document accessed from the Ministry through the Right to Information (RTI) Act revealed.

Karnataka and Odisha lost 133 elephants each due to electrocution during the period and Assam reported 129 deaths.

Among elephant casualties due to train hits, Assam stood first with 62 deaths, followed by West Bengal at 57.

A total of 169 mammals were killed by poachers in the 10 years and Odisha reported the highest – 49 deaths, followed by Kerala 23.

The Ministry said in the document that India had a total of 29,964 wild elephants as per an estimation done in 2017. The southern region comprising Tamil Nadu, Kerala, Karnataka, Andaman and Nicobar Islands, Andhra Pradesh and Maharashtra accounted for the highest population — 14,612 elephants.

The document said financial and technical assistance were provided to elephant range States under the Centrally sponsored ‘Project Elephant’ scheme to protect elephants, their habitat and corridors to address issues of man-elephant conflict and welfare of captive elephants. The Ministry released ₹212.5 crore under the Project Elephant to 22 States in the 10 years.

RTI activist R. Pandiyaraja of Tenkasi district in Tamil Nadu, who accessed the details in May this year, said the Centre and the States together had a greater responsibility in protecting elephants, a keystone species, and their habitats.

Among various measures taken, the document said that guidelines for the management of human-elephant conflict had been issued by the Ministry in October 2017 and elephant range States had been requested to implement the same.

Critical elephant habitats are notified as ‘elephant reserve’ for focus and synergy in elephant conservation and to reduce conflict. A total of 30 elephant reserves have been established in 14 major elephant States. To reduce man-elephant conflict and to avoid retaliatory killing of elephants, compensation is provided to local communities for loss of property and life caused by wild elephants.

A Permanent Coordination Committee has been constituted between the Ministry of Railways and the MoEFCC for preventing elephant deaths due to train hits.

12/01/2021 India Comments Off on 1,160 elephants killed due to reasons other than natural causes: MoEFCC
India