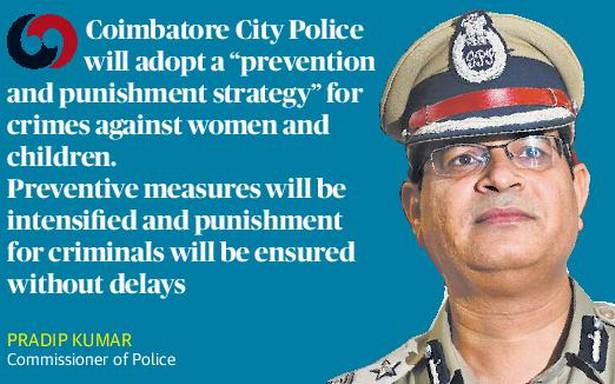 Crimes against women saw an increase of 48.7% in 2021 than the previous year as 235 cases were registered in 2021, while in 2020 it was 158 cases. The 235 cases comprised 13 rape cases, eight molestation cases, five abductions, 22 cases of cruelty by husband or relatives, 132 cases registered under the Tamil Nadu Prohibition of Harassment of Women Act and 55 cases under the Immoral Traffic (Prevention) Act. No dowry deaths were reported in the city police limits in both the years and all the accused were remanded, according to the data.

At a press conference on Friday, Commissioner of Police Pradip Kumar said that the Coimbatore City Police will adopt a “prevention and punishment strategy” for crimes against women and children. Preventive measures will be intensified and punishment for criminals will be ensured without delays in these cases, he said, adding that safety of women and children will be prioritised in the New Year.

Mr. Kumar told The Hindu that the police will adopt a three-level strategy to scale-up awareness to prevent crimes against children in Coimbatore in the New Year. This would involve interaction with children, staff members of educational institutions and parents of the children through awareness programmes.

The total number of murder cases reported in the city police limits were 27 for both the years, he said. A total of 1,872 CCTV cameras were installed in the city in 2021, taking the total number of CCTV cameras installed in collaboration with private players to 24,415. The city police have compiled a list of important and sensational cases to expedite trials in these cases, Mr. Kumar said.