The Karnataka Congress also condemned the seer for his demand. Senior Congress leader Dinesh Gundu Rao said, “Swamiji should not talk like this. The seer can give suggestions but should not pressurise the chief minister." 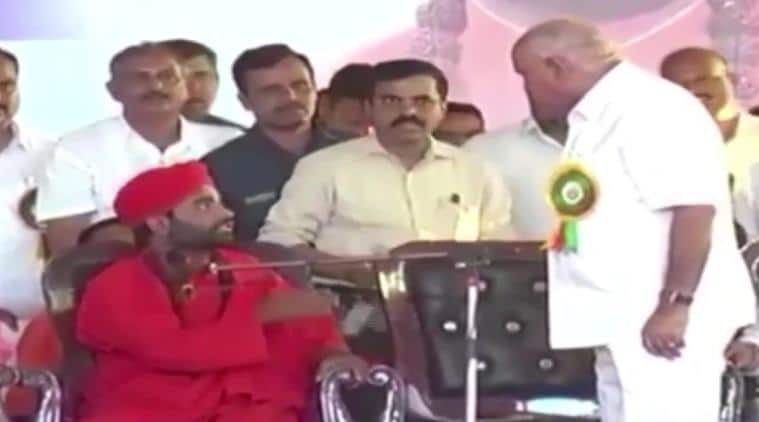 Karnataka Chief Minister B S Yediyurappa lost his temper at a public event on Tuesday after Lingayat seer Vachanananda Swami, who was sharing the stage with him, demanded ministerial berths for three legislators from the community.

Addressing the ‘Hara Jatre’ event in Harihar area of Davanagere district, Swami, the pontiff of Veerashaiva Lingayat Panchamasali Mutt, said, “There are 13 legislators from the community in the state. At least a minimum of three MLAs should be given ministerial berths. Former minister Murugesh Nirani helped you a lot, he must be given a minster post in the cabinet. If you don’t give the post, whole Veerashaiva Lingayat Panchamasali community will withdraw the support.”

Irked by his statement, Yediyurappa rose from his seat to leave the venue. “You should not speak in this manner. You can give suggestions but should not make such demands. If you continue to speak in this way, I will walk out of the event,” Yediyurappa said while touching seer’s feet. He was later pacified and persuaded by the seer to stay back. At the same time, the seer demanded that this was not his personal demand but of the community.

In August last year, the BJP government in Karnataka had inducted 17 ministers in the cabinet. The government is already under pressure to give ministerial berth to the 11 ‘rebel’ MLAs who switched from Congress and JD(S) to bring back BJP to power in the state.

Later addressing the gathering, Yediyurappa said, “The seer can suggest whatever he wants and he can also discuss it with me personally. I am not the kind of leader to stick to his chair. If I am not needed, I will resign and go home.”

The Karnataka Congress also condemned the seer for his demand. Senior Congress leader Dinesh Gundu Rao said, “Swamiji should not talk like this. The seer can give suggestions but should not pressurise the chief minister.”

Murugesh Nirani is a sugar baron and former BJP minister. Murugesh Nirani from Bagalkot district runs a chain of sugar mills in Karnataka. He was the minister of heavy industries in the Yediyurappa’s cabinet in 2008.