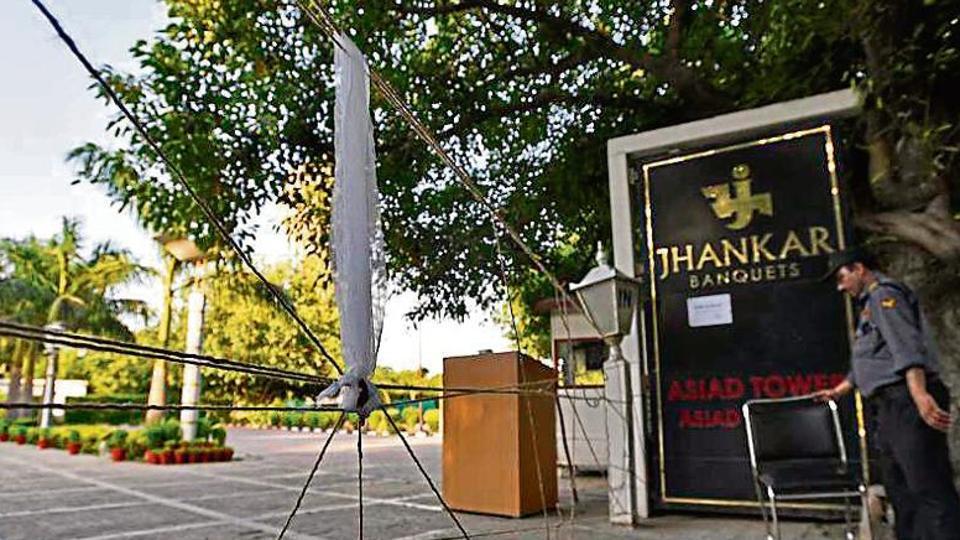 The Supreme Court-appointed monitoring committee on Tuesday sealed Jhankar Banquets — a wedding venue in Asiad Tower in south Delhi’s Khel Gaon — for allegedly continuing unauthorised constructions on its premises and for violation of green norms, despite court orders.

The banquet housing five venues has been on the radar of the committee since it was first sealed in 2010 for violations of the Delhi Master Plan-2021. It was later de-sealed in 2014, when the apex court ruled in favour of the banquet hall owner.

A notice saying ‘Entry for only Delhi Jal Board for booster pumping station’ was found hanging over the sealed entrance of the property on Tuesday.

“We sealed the offices and premises of Jhankar Banquets hall for not following the directions of the court. They have concretised a major portion, including the parking, which comes under the green belt. Also, some unauthorised constructions were found,” said KJ Rao, member of the sealing committee.

Rao added that the Archaeological Survey of India (ASI) had raised some objections to the constructions being done, as the area was located close to a heritage structure.

The committee members along with the Delhi Development Authority (DDA), which is the land-owning agency in this case, and a zonal official of the South Delhi Municipal Corporation (SDMC) carried out the sealing operation.

Jhankar Banquets owner Mahesh Kapoor, however, said that he was not issued any prior notice before the sealing was ordered. “I got to know of the area being sealed by my staff in the afternoon. I was not even issued a notice. I don’t know why they have sealed my property now when I have fulfilled all conditions, including planting 2,000 trees, as per guidelines of the DDA.”

Also, Kapoor said that he will approach the committee on the issue, as he has already taken advance bookings for October-November and will have to suffer huge losses.

Spread across five acres, the tower was leased out to Kapoor by the DDA in 1997 for 30 years.

According to a senior DDA official, the owner had “concretised” the parking area, which was supposed to be a green space.

“The owner had used interlocking tiles in the parking lot, which was supposed to be a garden. This is a violation for which we had not given any permission,” the official said.

The panel had on June 16, 2010, ordered the sealing of Jhankar Banquets after it found “gross” violation of the MPD- 2021 in the green area being used by it.

Till January this year, over 6,000 commercial establishments have been sealed in Delhi since the sealing drive started in the city on orders of the SC-monitored committee in December 2017, according to a report by Delhi Assembly panel on civic bodies.

The sealing drive was carried out by civic bodies on orders of the three-member committee violation of norms under the Master Plan.