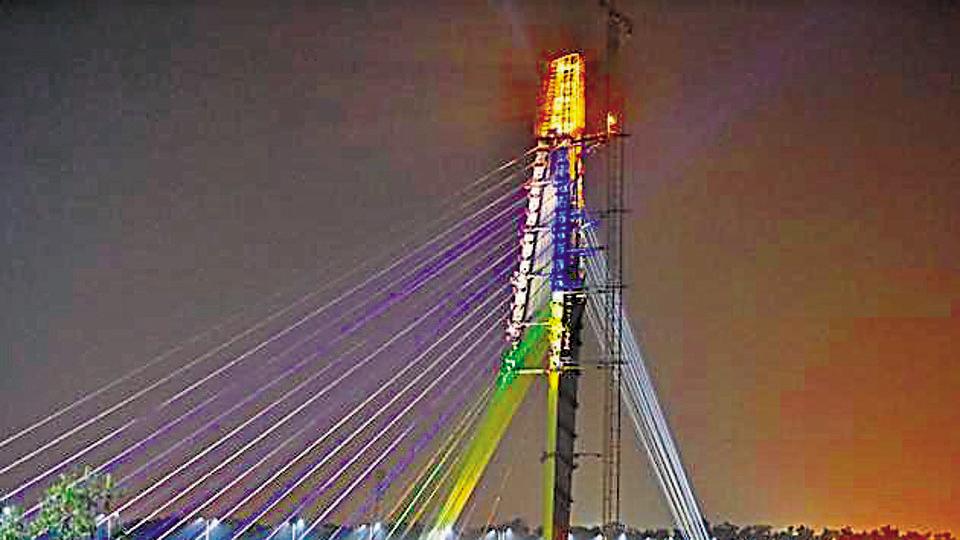 The viewing point for tourists atop Signature Bridge in northeast Delhi is likely to be ready by June 30, a senior official of the Delhi Tourism and Transportation Development Corporation (DTTDC) said.

The corporation, the agency that built the bridge, is constructing a glass façade (viewing gallery) atop the bow shaped pylon – twice the height of Qutub Minar.

Tourism department officials said the government will later decide when to open the point for the public.

The bridge, which connects outer Ring Road with Karawal Nagar and Bhajanpura in northeast Delhi, boasts of 127 strands of cables and is being projected as India’s first ‘asymmetrical cable-stayed bridge’.

It was inaugurated in November last year after a delay of eight years. The bridge, built at a cost of Rs 1,518.37 crore, has eased vehicular movement between northeast and north Delhi.

Tourism activities include setting up a glass box at a height of 154 metres at the top of the pylon from where tourists can have a panoramic view of the city, as from the Eiffel Tower in Paris. The Qutub Minar is about 73 metres tall.

“Construction of the glass box, elevators and pylon access system is in progress and we are hopeful of completing all this work by the end of June,” managing director, DTTDC, Shurbir Singh said.

Singh said the government will decide when to open the viewing gallery for the public. Two elevators will take people to the top of the pylon.

Deputy chief minister Manish Sisodia, who holds the tourism portfolio, on Monday inspected the bridge and directed the officials “not to compromise with safety measures”.

“Within one to two months, the tourist nomenclature will become visible. From the glass façade, visitors will be able to have a bird’s eye view of the city. The viewing gallery can accommodate 50 to 60 people at a time,” he said.

Sisodia said the government was also trying to make such arrangements to sell refreshments at the viewing gallery.

The government also plans “safe selfie spots” so that people do not climb the crash barriers or the cables of the bridge to click photographs with the structure.