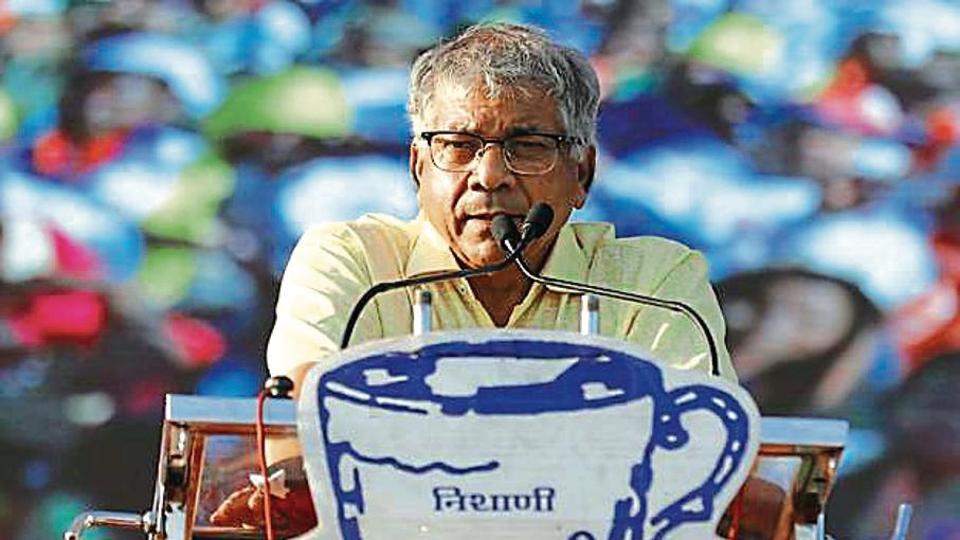 The VBA, in alliance with the All India Majlis-E-Ittehadul Muslimeen (AIMIM), polled 41.08 lakh (7.63%) votes in the state. While the AIMIM won the Aurangabad Lok Sabha seat, the votes bagged by VBA candidates led to the defeat of two former chief ministers, Ashok Chavan and Sushilkumar Shinde, in Nanded and Solapur, respectively.

Ambedkar now plans to contest the Maharashtra Assembly polls, a move that will up the pressure on the Congress-NCP.

“My main goal was the Assembly polls. We have already started preparations and will win substantial seats. We have performed better than the Congress and it should support the VBA in the upcoming state polls,” said Ambedkar.

“I don’t regret losing the Akola seat, as even with an alliance with the Congress, I would not have won it. Political results would have been different had Muslims dumped the Congress and picked us. We will now hold a brainstorming session and chalk out our agenda for the Assembly polls.”

Considering the votes bagged by its candidates, the VBA could upset the calculations in 40-50 Assembly constituencies.

For more than a decade, Ambedkar was relegated to shadows, as the Congress-NCP then propped up his rival Union minister Ramdas Athawale, who was then their ally. His first opportunity was his a massive rally outside CST to protest the demolition of the historic Ambedkar Bhavan at Dadar. The court, however, spoilt his plan to rebuild the structure, forcing him to go into a shell.

The second opportunity came on January 1, 2018, when Dalits were attacked at Bhima Koregaon. Ambedkar took the lead and announced a state-wide bandh, which proved to be a success. “The attack caused a lot of anguish among Dalit masses and Ambedkar was able to exploit it very strongly. Ambedkar can cause substantial damage in more than 40 seats as currently the Congress-NCP does not have a single Dalit leader to counter him,” said political analyst Hemant Desai.

After heading the Bharipa Bahujan Mahasangh (BBM) for decades, he decided to start a new outfit, VBA, in March 2018, which included the Dhangars and sections of Other Backward Classes, apart from Dalits. He soon announced an alliance with the All India Majlis-E-Ittehadul Muslimeen (AIMIM) to bring Muslims into his fold. “The real problem for the Congress now is Muslims have an option to vote for the VBA. In the coming elections, Owaisi brothers’ campaign will eat into Congress’s Muslim vote bank, benefitting the ruling alliance,” said Desai.

The Congress-NCP has been accusing Ambedkar of working in coordination with the BJP to ensure the defeat of the Opposition parties.

“Ambedkar travelled across the state in a helicopter. VBA candidates spent massive amounts in their election campaign. All this shows they are the B team of the BJP-Sena alliance,” allege Congress-NCP leaders. “They have a pact with the BJP to eat into our votes. It is now up to the electorate to take stock of the situation and neglect the VBA,” said Congress spokesperson Sachin Sawant.

The BJP played down the VBA saying that it was as much its rival as the Congress-NCP. “How can we ever entertain anyone who speaks against the RSS,” said BJP spokesperson Madhu Chavan.