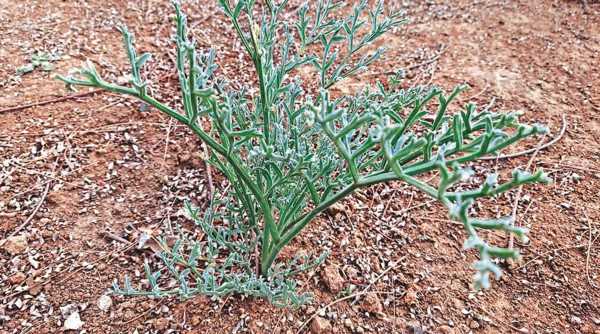 The widely used condiment in Indian households is totally imported into the country. Thousands of farmers in the high hills of Himachal Pradesh have started experimenting with the first-ever cultivation of Hing or asafoetida plants in India, according to scientists at Palampur-based Institute of Himalayan Bioresource Technology (IHBT).

The widely used condiment in Indian households is totally imported into the country. In a bid to introduce the herb here, the IHBT had planted its saplings at a village in the cold desert region of Lahaul in October last year. Though the plant takes five years to yield its product, the survival of the first batch has prompted the institute to expand the project and start growing Hing plants widely.

“We have distributed 11,000 saplings so far in the Lahaul valley alone, where farmers are eager to adopt this crop because it can later be grown in the wastelands and become a source of extra income,” said Dr Ashok Kumar, the project’s principal investigator at IHBT.

Rigzin Samphel Hayerpa (52), a resident of Kawaring village in Lahaul, who was among the first to receive the saplings last year, said that he has doubled his cultivation this year to 400 plants.

“The entire village is now growing the herb after receiving the saplings in April. We were told that the plant becomes dormant in summers and continues to grow in winters,” he said.

Dr Kumar said that Hing or asafoetida is extracted from the rhizome and root of the plant, called Ferula asafoetida, after around five years of growth. The carrot-shaped root is cut open to obtain a milky fluid or latex which is Hing – technically the oleo-gum resin of the plant.

“Since the plant roots have to be cut open for the extraction, a single plant gives a single yield. That is why the plants have to be sown sequentially each year to get the subsequent year’s produce. Also, after the plant matures, one has the option of either extracting the Hing or obtaining the seeds but not both. Right now we are using imported seeds to grow the saplings in our green house in Palampur. In future, we might start some seed production centres as well,” he said.

The scientist said that around 6,000 plants are now also being grown in other high-altitude areas of the state besides Lahaul, including parts of Kinnaur, Chamba and the Janjehli valley in Mandi.

06/03/2021 Cities Comments Off on Taking roots in high hills of Himachal, the first hing plants
India