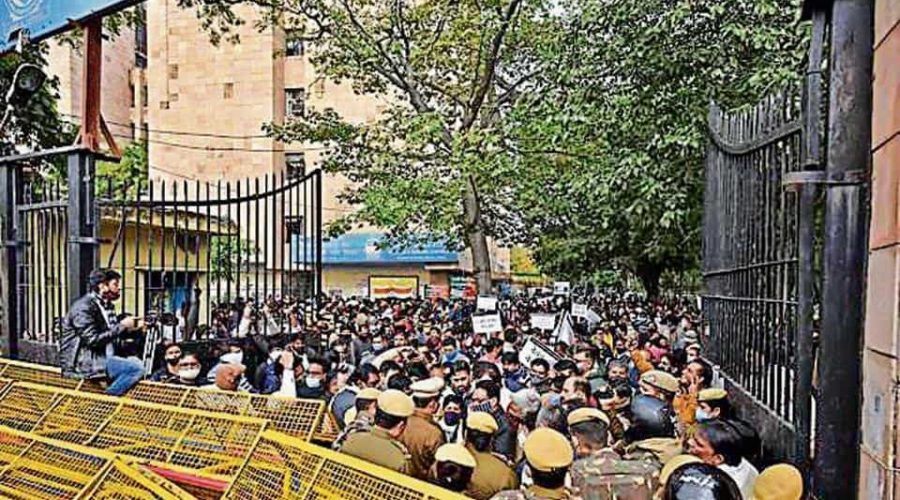 Over 50,000 employees of Delhi’s three municipalities began an “indefinite strike” on Thursday over the non-payment of pending salaries and pensions.

The employees on strike include nurses and paramedical staff at Hindu Rao Hospital and Rajan Babu TB Hospital, teachers, engineers, staff of the horticulture department, clerks, domestic breeding checkers, and class 4 staff such as ward boys, beldars and labour workers.

The strike has been called under the aegis of the Confederation of MCD Employees Union — an umbrella body of civic body employees’ unions.

The employees also staged a protest at the Civil Lines zonal office of the North Delhi Municipal Corporation, demanding the release of their pending salaries.

They also attempted to march to Lieutenant Governor Anil Baijal’s office, but were stopped by the police midway through. They later, to the L-G’s office, submitted a memorandum of their demands, which included payment of pending salaries, unification of the three civic bodies and finding a permanent solution to end the financial crisis in the corporations.

“Employees have been working without a salary for four or five months and are now unable to take care of their families. We have raised the issue with the authorities several times, but to no avail. We are compelled to go on strike until our demands are met. We want all our pending salaries and pensions to be cleared and a permanent solution to this problem,” he said.

“It is time the civic administration clears our pending salaries. Nurses across North MCD-run hospitals have not been paid salaries for October, November and December. We are going on indefinite strike due to the breach of assurance from the authorities,” Indu Jamwal, president Nurses Welfare Association Hindu Rao Hospital, said.

Jai Prakash, North corporation mayor, said the strike was not a solution to the problem, claiming that salaries were being paid despite a “financial crisis”.

“I appeal to workers to call off the strike. There is a funds crunch, but we are still releasing salaries to various departments one-by-one. We are making arrangements to pay salaries of the agitating employees as soon as possible,” he said.