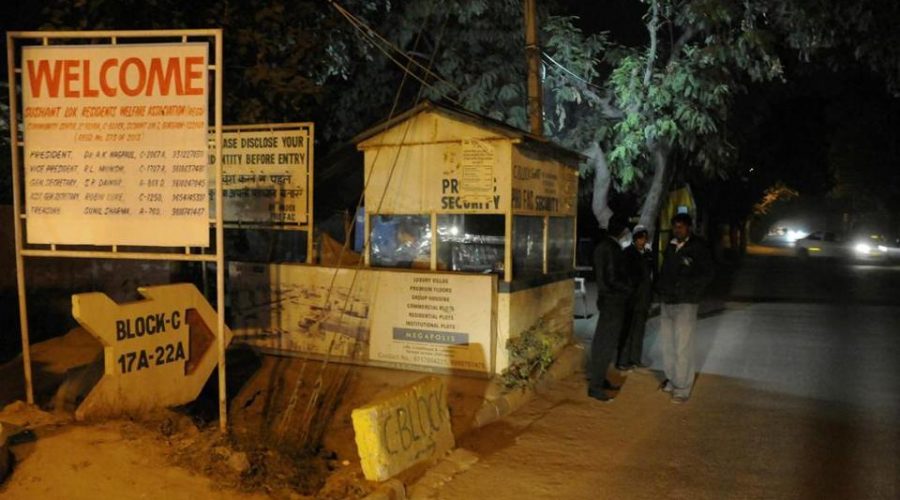 Last month, one instance of house theft was reported every alternate day in Sushant Lok-1 and once every three days in Palam Vihar, with 9 and 13 cases, respectively, registered from the two colonies, shows data obtained from the Gurugram police. But the trend is not specific to the month of June, when many travel during the summer holidays. The police data shows that since February, the two colonies, along with Sectors 56-57, have seen the highest number of burglaries in the city.

The police said that since 2016 sectors 56-57 have featured in the list of places with high instance of house thefts, but a spurt in such cases is new for Palam Vihar and Sushant Lok-1.

The worrying figures come five months after the civic maintenance of these privately developed colonies was transferred from the builders to the Municipal Corporation of Gurugram (MCG). The outline for this transfer, however, failed to appoint an authority for maintaining non-mandatory services, such as security, which was earlier handled by the private developer.

Police commissioner Muhammad Akil accepted that “there has been a consistent increase in the number of burglaries being reported from these two areas in the last 3-4 months”. He said, “We have taken cognizance of this and will approach RWAs and residents in these areas to hire security guards and work with them to set up a CCTV surveillance network. In addition, we would also increase police presence in the two colonies by deploying constables at key points.” As police figure out how to tackle the issue, residents live in fear.

“I have been living here for 14 years. Security was never an issue. By handing over the colony to the MCG, it has now become one. I am yet to receive any updates from the police in my case. I hope authorities come up with a solution before more houses are burgled,” said J Block resident Dev Raj Sharma.

Sharma’s is among those houses which were targeted in the area on June 27. He had gone out with his wife around 11.15am and returned around 6pm to discover that the house door was latched from the inside, windows were open and all the valuables were missing. The couple’s tenant, who lived on the first floor and was overseas at the time, was also burgled.

Residents said burglaries increased after April 1, when the contract with the security agency ended, and not a single guard was deployed in the area since.

“Till February, around 80 security guards were stationed across Palam Vihar, which actually needed 120 guards,” former RWA president Sunil Yadav said, adding that lack of security in the months of May and June was most inopportune as that is the time when, because of summer holidays in schools and colleges, most residents travel or venture outside their homes more often.

Despite the builder’s exit in February private security guards have been deployed in all the five blocks, barring C Block. Its 473 houses, which were earlier manned by 120 guards, are now vulnerable to thefts as the security agency, hired by the builder, could not reach a financial agreement with the RWA.

Residents said that in the last four months burglaries have become commonplace. “In C block, more than 10 burglaries took place last month. On Monday, a few people were planning to enter an unoccupied house here but the neighbourhood ‘dhobi’ took notice and raised an alarm. He averted theft but the burglars managed to flee. We have been facing such issues on a weekly basis, even during the day,” said resident Sudhir Sachdeva who was a part of the group of Block C residents who met deputy commissioner and MCG chief Amit Khatri, on Wednesday.

They sought permission to install 10 gates in Block C, CCTV cameras and deploy security guards at each of these points.

Khatri said, “There is no rule which forbids residents from pooling money and hiring security guards or introducing security measures in their respective areas. They can do so on their own without any government intervention.”