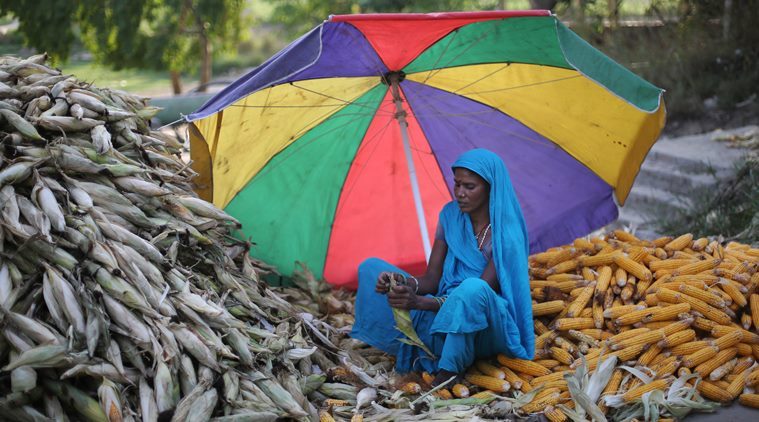 Government officials says that maize is the ultimate solution to replace paddy in Haryana and has various strengths such as many fold water saving, increase wheat yield, suitable for conservation and less chemical input in maize farming. As many as 3491 Haryana farmers on Monday decided to shift to alternative crops, mainly maize, from paddy cultivation covering more than 1600 hectare land. Monday was first day for registration for Haryana government’s ambitious scheme for crop diversification to check on the depleting water table. The registration will be on till June 15.

Happy with the response on first day, Haryana Agriculture and Farmers Welfare Minister Om Prakash Dhankar told The Indian Express that they were committed to crop diversification in the state. The state government had recently announced to shift 50,000 hectares to maize, arhar (pulses) and oilseeds from paddy as part of a pilot project in seven blocks of the state. The government had also announced giving an incentive of about Rs 10,000 per hectare to the farmers.

Dhankar today said, “We have assured the farmers that apart from financial incentives, there will be proper arrangement for purchase of alternative crops. The BJP government in Centre had already increased Minimum Support Price of bajra to Rs 1950 per quintal from Rs 1425 per quintal last year. It has proved an encouragement to the farmers who opt bajra crop in the state.”

Talking about the serious problem of depleting groundwater, Dhankar said that almost half of the total water used for agriculture in Haryana is pumped from underground in the absence of adequate canal water. “But the water recharge takes place in case of only 60 per cent groundwater leaving a gap of 40 per cent. To tackle this, we are moving towards alternative crops in place of paddy apart from opting micro-irrigation.”

Director Haryana Agriculture and Farmers Welfare Department Ajit Balaji Joshi told The Indian Express that maize has emerged favourite crop among the 3491 farmers who decided to shift to alternative crops from paddy on Monday. “These farmers have made mind during the field level camps organised by our officials. The registration will be online on a portal.”

Government officials says that maize is the ultimate solution to replace paddy in Haryana and has various strengths such as many fold water saving, increase wheat yield, suitable for conservation and less chemical input in maize farming.

“Growing baby corn and quick maturing vegetables will not only fulfill the daily requirements of the people, but it would also generate employment opportunities to local youth. If maize and arhar are sown instead of paddy, it is expected that 10 per cent more wheat would be produced because maize gets matured in 90 to 100 days and fields are empty by October 10. Therefore, there will be enough time for sowing wheat whereas the paddy crop takes 130 to 140 days to mature and fields are empty in November. Then there is the problem of crop residue management.”