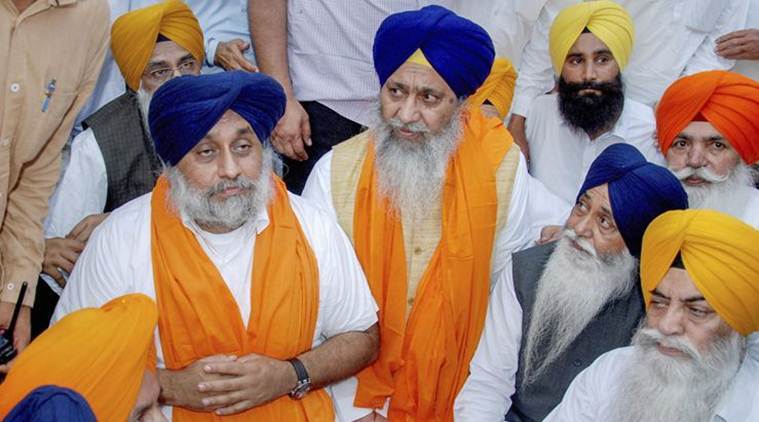 The party noted that “Akal Purakh responded positively to the prayer of the SAD president Sukhbir Singh Badal” and “decimated all those who committed or planned the sacrilege of Sri Guru Granth Sahib”. The Shiromani Akali Dal (SAD) Tuesday passed a resolution to express “appreciation and gratitude” to party president Sukhbir Badal for his “tireless and dynamic leadership during this poll campaign, going around the state and mixing with lakhs of workers and other Punjabis”. Another resolution said that all those who “pretended” to contest Lok Sabha polls from Punjab on the issue of sacrilege were “thrown out by people” in an act of “divine justice”.

The party noted that “Akal Purakh responded positively to the prayer of the SAD president Sukhbir Singh Badal” and “decimated all those who committed or planned the sacrilege of Sri Guru Granth Sahib”.

“The Congress president [Sunil Jakhar] was leading the Congress-sponsored elements who had formed the so-called morchas on the sacrilege issue. He was demolished as were his co-conspirators like Sukhpal Khaira , Baljeet Singh Daduwal, Dhian Singh Mand, Simranjit Singh Mann and the so-called Taksalis,” said a resolution adopted Tuesday.

The party also congratulated Sukhbir for “registering the biggest win in these elections, defeating his Congress rival by (nearly) two lakh votes.” The party also thanked Harsimrat Kaur Badal on her victory “despite the Congress and all the so-called Panthic elements conspiring against her”.

In another resolution, SAD came down heavily on the “crushing hike in the electricity tariff in the state”. The party also lashed out against the government for the “irregular supply to every sector, especially domestic, farmers and the industry in the state”.

A core committee resolution expressed “grave concern” concern over the growing incidents of rape and murder in the state “like the one at Dhuri in which a four-year-old became a victim of the government’s failure to control lawlessness.”

Demanding immediate reversal of the inhuman decision to reduce teachers’ salaries, the core committee said it would not allow such injustice against teachers and would stand by them and force the government to take back this anti-people step.

In another resolution, SAD core committee asked Prime Minister Narendra Modi to take up with Pakistan the issue of demolition of a heritage and religious site connected with the life of Guru Nanak Dev

It also expressed “grave concern over the death of an innocent boy in police custody (in Faridkot) and demanded strictest legal action against the culprits”.