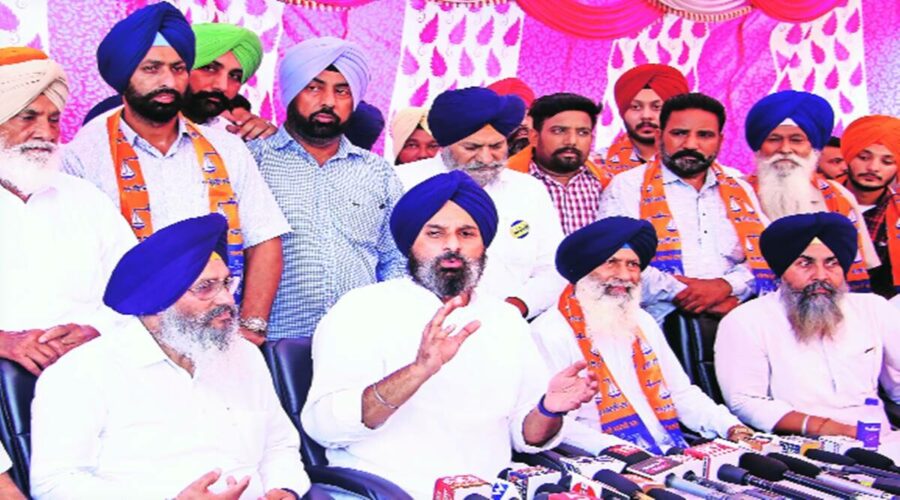 Majithia said it was astonishing that the CM, who had been holed up at his farm house for more than four years, was trying to take credit for the sacrifices of the brave farmers. Former minister Bikram Singh Majithia Tuesday condemned CM Amarinder Singh for insulting the Kisan Andolan by asserting that the agitation was running successfully due to support extended by the Congress party even as he asked the Samyukt Kisan Morcha (SKM) to explain why it was not objecting to political functions being held by the Congress and Aam Aadmi Party (AAP).

Majithia said it was astonishing that the CM, who had been holed up at his farm house for more than four years, was trying to take credit for the sacrifices of the brave farmers.

He said the truth was that the farmers, who had withstood biting cold as well as heat and rain, had been betrayed by the Gandhi family. “The Congress party did not issue a whip against the three agri bills and both Sonia Gandhi and Rahul Gandhi did not attend Parliament session when they were introduced for voting. We also know how the Congress party always championed all the provisions of three agriculture acts and had even promised in its election manifesto to privatise APMCs”.

Speaking of the stand of the SKM telling political parties not to organise any functions, Majithia said the SKM had thrown itself open to questioning.

He said SKM itself was speaking in different voices. “Even Joginder Singh Ugrahan of the BKU (Ugrahan) has clarified that their fight was against the BJP only,” he said, adding that he also personally felt that the Kisan Andolan was a national level movement and should not be restricted to Punjab alone.

Answering a question, Majithia said it was condemnable that farmers tilling their land across the barbed wire fence had not received the Rs 10,000 per acre compensation since four and a half years. “Even the grant received from the Centre for the same has been misappropriated,” Majithia said.

He said the decision to compensate border farmers for the hardship being faced by them had been taken by former CM Parkash Singh Badal who had taken up the matter with then Prime Minister Atal Behari Vajpayee. “The previous SAD led government had given full compensation to farmers before demitting office”
Replying to another query, he made an appeal across party lines to do the right thing vis a vis the Jallianwala Bagh memorial.