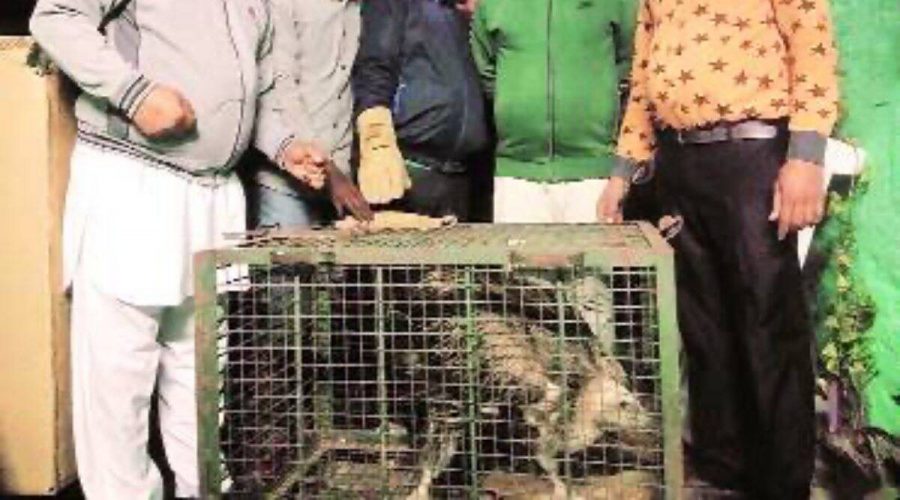 The raptor was kept in the building of the UT Environment department in Sector 19. According to a checklist of Chandigarh birds, Himalayan Griffon vulture is a fairly common bird, who is a winter visitor. A JUVENILE Himalayan Griffon vulture flying at low height collided with a TV cable in a slum area, Kacchi Colony, at Dhanas, behind Panjab University campus on Saturday. The raptor was rescued by a local couple, who sheltered it inside their house for around an hour. Wildlife wing officials said that most likely, the juvenile raptor had mistakenly lost its way and got separated from its colony.

Ajay Bahat, who rescued the vulture and kept it inside his house, said, “In the melee, the raptor hit its nib on my left hand. From the size of the bird, I realised that it was not a mature bird. However, it was very tough to keep the bird inside the house. The bird almost created a havoc inside our house. It repeatedly tried to fly and collapsed by the walls.

For a brief time, I locked it inside the bathroom and later put it inside the cardboard cover of my recently purchased washing machine.” Ajay is a security guard at Sri Guru Gobind Singh College (SGGSC) in Sector 26.

Ajay’s spouse, Rupa said, “I was scared after looking at the bird. I had never seen it in my life. As my husband let it loose in the house, it tried to fly and collapsed by the walls. It appeared like he wanted to escape from the house.”

Ajay informed the UT wildlife wing helpline about the bird around 4.45 pm, following which a rescue team of the UT Wildlife wing rushed to the spot. The team shifted the vulture into a cage. Meanwhile, Ajay’s small house filled up with the rescue team members and onlookers, who were eager to capture every moment on their cell phones.

A vulture is a shy creature that avoids close proximity of human beings. A senior scientist working in the field of vulture conservation, Vibhu Prakash said, “A vulture can even die due to nervousness caused by the human contact. Vultures do not eat food for days once they come in contact with humans.”

(DCF) Abdul Qayum said, “The nearby Morni Hills in the Shivalik foothills are one of the favourable habitats of vultures in the region. The body inspection of the raptor indicates that he is too frail to fly and will take time to recover fully. We are in the process to rope in Jatayau Vulture Breeding Centre (JVBC) situated near Pinjore in Panchkula for rehabilitating the rescued creature.”

The raptor was kept in the building of the UT Environment department in Sector 19. According to a checklist of Chandigarh birds, Himalayan Griffon vulture is a fairly common bird, who is a winter visitor.