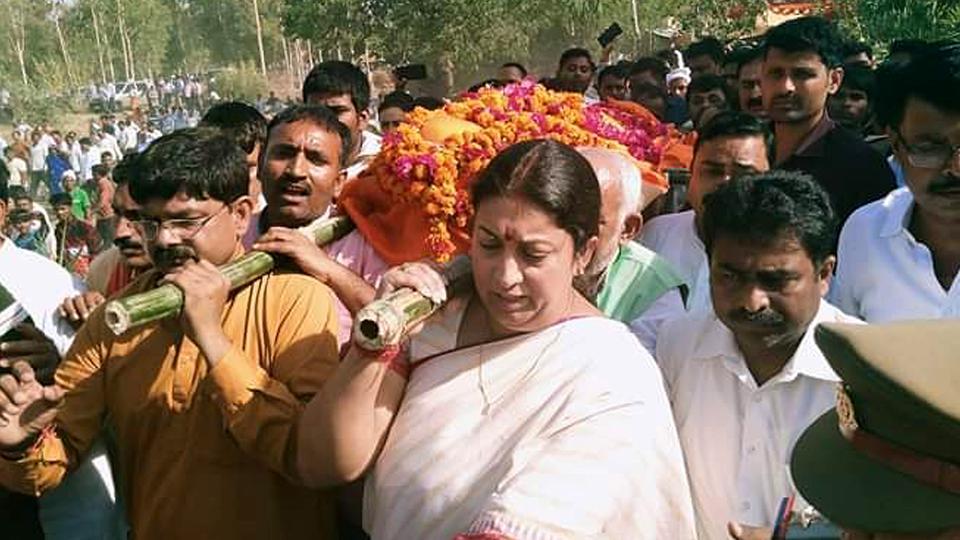 Repercussions of political rivalries during the Lok Sabha elections have gradually started to surface with a string of murders being reported from different parts of Uttar Pradesh after the polls results.

As many as five local political leaders associated with different parties, including Bharatiya Janata Party (BJP) MP and cabinet minister Smriti Irani’s close aide Surendra Singh of Amethi, have been murdered since May 24.

“Apart from the Amethi incident, the police are yet to work out four of these cases. Initial investigations in all cases hinted the victims’ political rivalries within the party or with people associated with other parties as the apparent motive behind the crime,” said a senior police official at UP DGP headquarters in Lucknow.

Those killed include three Samajwadi Party (SP) leaders of Ghazipur, Jaunpur and Gautambuddh Nagar and one each of Bahujan Samaj Party (BSP) and Bharatiya Janata Party (BJP) in Bijnor and Amethi respectively.

These incidents have raised political tempers. SP chief Akhilesh Yadav criticised the killings of his party men and asked SP senior leader Ram Govind Chaudhary to investigate into the murders. The SP chief is likely to visit the house of district panchayat member Vijay Yadav alias Pappu, 44, who was shot dead in Ghazipur district a day after the poll results were declared on May 23.

Smriti Irani has announced that she would leave no stone unturned to ensure stringent punishment in a court of law for the killers of Surendra Singh. She even acted as one of the pall bearers at Singh’s funeral during her visit to Amethi.

Superintendent of police of Amethi said the arrests of five accused in the murder of former pradhan of Amethi’s Baraulia village, Surendra Singh, and police investigation confirmed that the crime was a fallout of his political rivalry over pradhan elections that fuelled during Lok Sabha polls. Surendra Singh aggressively campaigned for BJP candidate Smriti Irani against Congress president Rahul Gandhi.

The slain former pradhan’s brother Narendra Singh told police that one of the five accused, Ram Chandra, was a Congress supporter and was present at some distance when his aides Waseem, his brother Naseem and Golu Singh shot dead Surendra Singh while he was sleeping in a verandah outside his house on the intervening night of May 25 and 26.

He alleged that one Dharm Nath Gupta was also involved in criminal conspiracy due to rivalry with Surendra over gram pradhan election.

“Though no arrest has been made so far, initial probe hinted that the murder is a fallout of Vijay Yadav’s political rivalry. He was assertive on establishing his political supremacy in the area,” said Chaturvedi.

Vijay Yadav was shot dead outside his residence by three unidentified persons at Salarpur village in Ghazipur district. Newly elected BSP MP from Ghazipur, Afzal Ansari, SP MLA Virendra Yadav and party workers staged a dharna on May 25 with the body kept on the road.

Similarly, another SP leader Lalji Yadav, 45, was sprayed with bullets by six unidentified assailants near Siddiqpur town on Shahganj-Jaunpur road when he was going to Jaunpur district headquarters in his SUV on Friday morning.

He was a history sheeter of Sarai Khwaja police station area and multiple cases of loot and murder were registered against him in the past.

Superintendent of Police of Jaunpur Ashish Tewari said initial probe hinted at the victim’s political rivalry behind the crime. He said Yadav was quite active in the district unit of Samajwadi Party and served as district unit secretary of the party in the past.

His father Rajpati Yadav won panchayat election four times and was village head for the last three consecutive terms. Moreover, he had ensured victory of his sister-in-law Abha Yadav in the election of district panchayat member.

In BSP leader Haji Ahsan’s murder, SP (Bijnor) Sanjiv Tyagi initially did not find any personal enmity in the case. He said the exact motive behind the killing was yet to be ascertained.

A Samajwadi Party leader said the state had plunged into complete lawlessness where political adversaries were targeted and killed.

“Why are the police showing apathy in acting against the murderers? Will they only act when BJP workers get killed. All claims of UP CM of maintaining law and order are false,” he said.

Political rivalry over Rae Bareli zila panchayat chairman’s post took an ugly turn when Congress MLA Aditi Singh’s convoy was attacked twice on its way to the district panchayat office where voting was scheduled to take place on a no-confidence motion against the sitting chairman Awadesh Pratap Singh.

The attack on the convoy took place between Bacchrawa toll plaza and Harchandpur in Rae Bareli on May 14. Aditi Singh, daughter of Rae Bareli strongman Akhilesh Singh, received minor injuries while two others accompanying her were severely injured as two four-wheelers of her motorcade toppled while trying to escape 15 masked assailants who reportedly opened fire at her convoy. The MLA had accused BJP Lok Sabha candidate Dinesh Pratap Singh (who contested against Congress candidate and UPA Chairperson Sonia Gandhi from Rae Bareli) and his brother Awadesh Pratap Singh.

She claimed it was a planned attack to defer the no-confidence motion against the chairman. Earlier, Dinesh Pratap Singh was in the Congress party and joined the BJP just before Lok Sabha polls.

A local BJP leader of Rae Bareli, Shiva Singh, 35, was killed allegedly in clash with a group of Dalit community in a dispute over political supremacy in Harchandpur area on April 14. Police said Singh had strained relations with another group due to political differences. The clash ignited when they clashed over clearing of the passage that leads to the victim’s house in Manjhgawa village. He was a close associate of BJP’s Lok Sabha candidate Dinesh Pratap Singh from Rae Bareli.

State spokesman of Samajwadi Party Rajendra Chowdhary said the state government was working with political vendetta and this was leading to murders of leaders and workers of political parties.

Moreover, Akhilesh Yadav will visit Ghazipur to meet the family members of Vijay Yadav and inquire about the incident, he added.