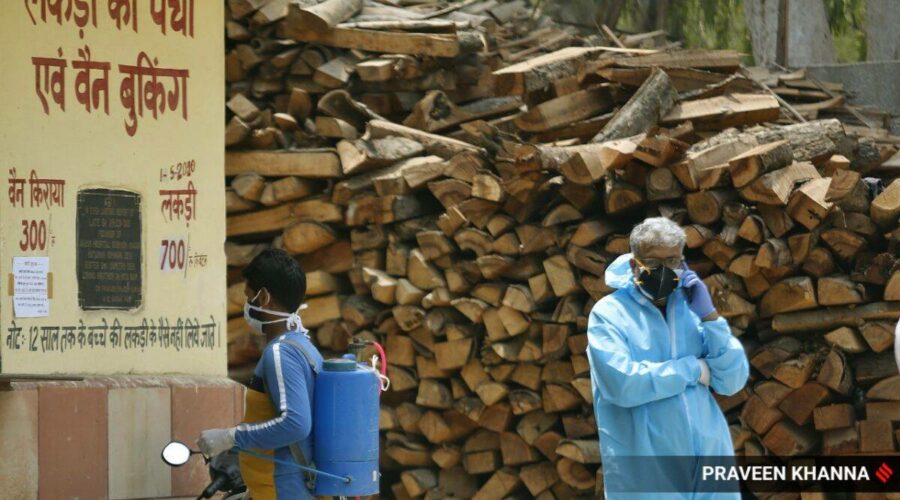 While the official toll as of April 28 is 15,009, several Covid patients who died are missing from records On Thursday, this figure stood at 381, the highest to date in Delhi in a day. So far, 15,009 people have officially died of Covid but records become meaningless as hundreds, who should be, are not part of it.

The Indian Express had on Tuesday reported that while the official toll in the last 10 days (April 18 to April 27) is 3,049, the number of people laid to rest as per Covid protocol at the 23 MCD-run crematoriums and cemeteries is 6,958.

As hospitals close their doors to patients, under duress, many have drawn their last breath outside the gates over the past two weeks. Several of them had Covid positive reports, some were waiting for theirs but had the symptoms, while others had a Covid negative report but their chest CT scans showed telltale signs of the disease.

A 69-year-old Covid patient, who died in her home in East Delhi, was not buried as per Covid protocol. Her son tried to get her admitted to many hospitals but was refused as they did not have beds or oxygen.

The family decided to complete her last rites in a facility near their house and was not asked for a Covid report or a certificate from a doctor. They chose not to disclose to the workers at the facility that she had Covid because of “stigma”. Her death will not be attributed to the virus as she was not being tracked by the area surveillance officer and was not given admission in any hospital.

“We sanitised and washed the body at home, covered it and carried it on our shoulders,” a family member said.

Another man, whose brother died outside GTB Hospital, said since he was not admitted, the hospital did not keep his body in the mortuary in a body bag. “I took my brother’s body to Ghazipur and showed them the Covid positive report. The body was cremated as per the Covid protocol. I have also mentioned Covid as the reason for death,” he said.

Another family was allowed to take the body of a 55-year old man home after he died trying to get admission at GTB Hospital. The family suspects he had Covid as he was breathless, had fever and cough. They took the body to Seemapuri and cremated him without following any Covid protocol.

In April last year, the Delhi government had formed a three-member death audit committee to look into deaths of those people who had tested positive for Covid. At the time, The Indian Express was told all deaths will be enquired into by this committee and will then be categorised as such if they meet the criteria. For example, a senior Delhi government official had said, if a person was in an advanced stage of cancer and contracted Covid, his death would not be counted as a Covid death.

Noting the concerns regarding the number of deaths in the capital, Health Minister Satyendar Jain said: “This is not the time to politicise things. Six months ago, the same concern was seen, but nevertheless it was proved that the numbers were accurate. Firstly, nobody wants even a single life lost. Secondly, we do not have any right to conceal numbers. The death certificates are being drafted constantly, and if the fatality is due to Covid-19, it is being duly mentioned in that. Not just right now, but always, everything has been displayed absolutely transparent by the Kejriwal-led Delhi government. I assure you that nothing has been hidden by us, and nothing will be in the near future.”

Another challenge are deaths that are happening at home but are unaccounted for, as district surveillance officers who are supposed to get in touch with patients after they have tested positive have not done so in many cases. While these patients may have positive reports, no one has checked on them to ask about their wellbeing.

“If people are dying at home and outside hospitals, there is no way of knowing if they died of Covid or not. Hospitals are overwhelmed with the case load that they have but are following the protocol set for Covid deaths,” said a senior Delhi government official.