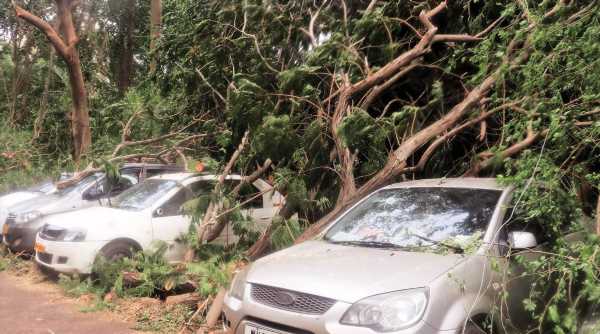 Last year, 323 trees fell between June 3 and June 6, in the aftermath of cyclone Nisarga that hit Raigad district. In over 24 hours between Sunday and Monday, 812 trees were uprooted as extremely severe cyclone Tauktae brushed past the city. An inspection of the uprooted trees has revealed that 70 percent of those were non-native species, including Gulmohar, rain tree and royal palm among others.

Last year, 323 trees fell between June 3 and June 6, in the aftermath of cyclone Nisarga that hit Raigad district.

The Brihanmumbai Municipal Corporation (BMC) on Wednesday stressed its existing policy of planting native species trees and said an updated list of native tree species will be issued for citizens and private organisations to follow during plantation drives.

Of the 812 trees that fell, 504 were on private premises, while 308 were in gardens or roadside. Total 1,454 tree branches also fell due to the storm’s impact.

Experts earlier had urged the civic body’s garden department to undertake a study of trees that have fallen during the monsoons, especially the ones which get uprooted. Many believed that over 50 percent of trees that collapsed are non-native species, unable to withstand heavy rainfall.

In March this year, the BMC’s tree authority, headed by the municipal commissioner, approved a policy to plant native species trees across the city. The BMC issued a list of 41 species that are indigenous and are more suited to the soil and climate of Mumbai.

As per the 2019 audit, there are over 1.75 lakh roadside trees. While private property owners are supposed to report deadly trees or apply for pruning, the BMC’s garden department also sticks caution notices around trees in such properties that are found dangerously tilting towards the road.

In the wake of over 2,000 trees/branches fall in over 24 hours, the BJP on Wednesday alleged that the Tree Authority failed to appoint contractors for tree pruning in six administrative wards. The number of tree collapses would have been far less if the BMC had completed scientific pruning of trees, the party alleged.

Chief Minister Uddhav Thackeray is likely to visit the areas affected in Konkan districts by cyclone Tauktae in the next few days to assess the damage. The issue was discussed in the cabinet meeting held on Wednesday.

“The financial assistance would be given to the affected as per the norms. The CM is likely to visit the affected areas and will announce a package above the existing norms,” said a minister.

The cyclone caused damages in Raigad, Ratnagiri and Sindhudurg districts to orchards spread over 8,830 hectares of agricultural land besides causing partial damages to over 12,000 houses.