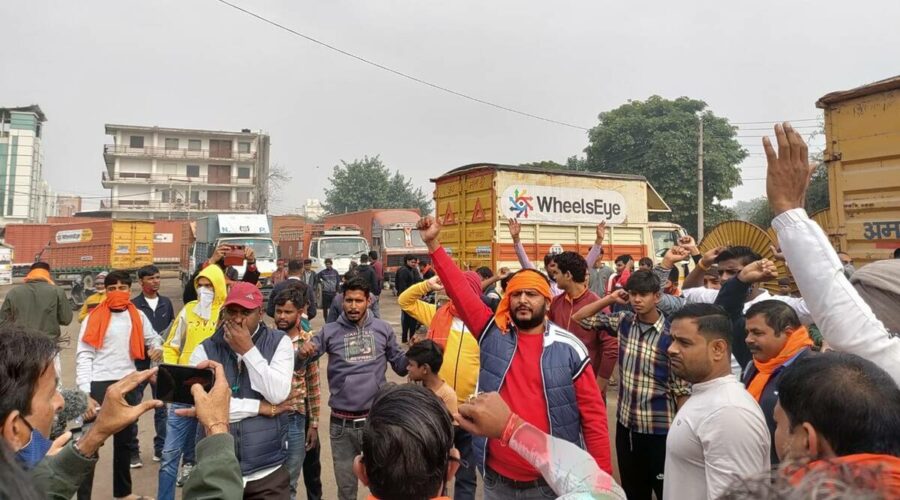 Six-seven persons were put into buses by police for allegedly attempting to disrupt the prayers, which were eventually offered amid sloganeering even as police created a cordon by pushing back the protesters. Locals and members of right-wing groups who have been attempting to disrupt namaz in Gurgaon over the past weeks resorted to a new tactic Friday, parking trucks in the periphery of an area earmarked for prayers by the Muslim community in Sector 37.

Six-seven persons were put into buses by police for allegedly attempting to disrupt the prayers, which were eventually offered amid sloganeering even as police created a cordon by pushing back the protesters. One person was later detained.

In the crowd were men who were arrested earlier too for similar protests in Sector 12. The men, who have been spearheading protests against namaz at public places in the city, were also ‘honoured’ at a Govardhan Puja organised by Sanyukta Hindu Sangharsh Samiti recently.

Parking trucks is the latest in a series of methods employed by the protesters to stop namaz in the open – the men have in the past conducted a havan ceremony in Sector 37 “to commemorate 26/11 martyrs on the 13th anniversary of the Mumbai terror attacks”, played cricket at a namaz site, conducted a puja at one, and left dung cakes behind afterwards.

On Friday, the protesters numbered around 70, most of whom claimed to be from nearby villages of Khandsa, Narsinghpur, Mohammadpur Jharsa, and Begumpur Khatola. They said parking their trucks and playing cricket at the site had nothing to do with the namaz row.

As police asked them to disperse in view of a law and order issue and for not following Covid norms, many refused to budge.

Meanwhile, the Sanyukt Hindu Sangharsh Samiti, which was part of the committee formed by the deputy commissioner last month to identify spots where namaz could be offered, issued an ultimatum to the administration Friday, stating that from next week, they would not allow namaz at a single spot in a public place in the city. “We had given the administration one month’s time, which ends tomorrow. From December 10, we will not allow namaz to take place at any of these points. I want to reiterate that no list or spots had been designated for namaz. The permission was only temporary. Through this protest by the brave people of Khandsa, our movement has got more strength. We are receiving messages of support from all over the country,” said Mahavir Bhardwaj, president of the Samiti.

Avaneesh Raghav, a businessman from Khandsa who was among the organisers of the havan last week and was present at Sector 37 on Friday, said, “We have a transport business and are from the union. This is our land… We have simply gathered here to park our trucks since there is no space elsewhere. The government has neither given permission to Muslims to offer namaz here nor has it stopped us from coming here… Locals from villages here do not have space to conduct their events while some outsiders come here to offer namaz from as far as Mewat…”

For over an hour, the protesters continued to camp at the site, raising ‘Jai Shri Ram’ and ‘Vande Mataram’ slogans. At 1.05 pm, as a group of Muslims led by Muslim Ekta Manch chairman Shehzad Khan made their way to the site, the protesters tried to confront them, but were pushed back by the police.

At least seven people were bundled into a bus and taken to a police station. Among them was Dinesh Thakur, president, Bharat Mata Vahini, who has led protests against namaz in Sector 47 and was booked in April for promoting enmity among communities.

DCP (West) Deepak Saharan said, “One person, Dinesh Thakur, was detained under preventive measures of CrPC for causing a law and order issue. Earlier too, he was arrested in a similar incident in Sector 47. Others were let off after a warning.”

Thakur, before his detention, said, “This namaz is a conspiracy… of land jihad.”

Amit Hindu, who was among the 26 people who were arrested on October 29 for attempting to disrupt prayers in Sector 12 A, was also part of the protests on Friday. “We are not scared of arrests,” he said.

Shehzad Khan said the Sector 37 site is among the list of points agreed upon for Friday prayers by the recently formed committee after consultations with all stakeholders: “This is government land. The committee had reduced the spots from 37 to 29. We agreed to it. But at the designated sites, we will offer namaz. If people have any opposition, they should approach the administration… If the administration asks us to stop offering namaz in the open, we will stop.”