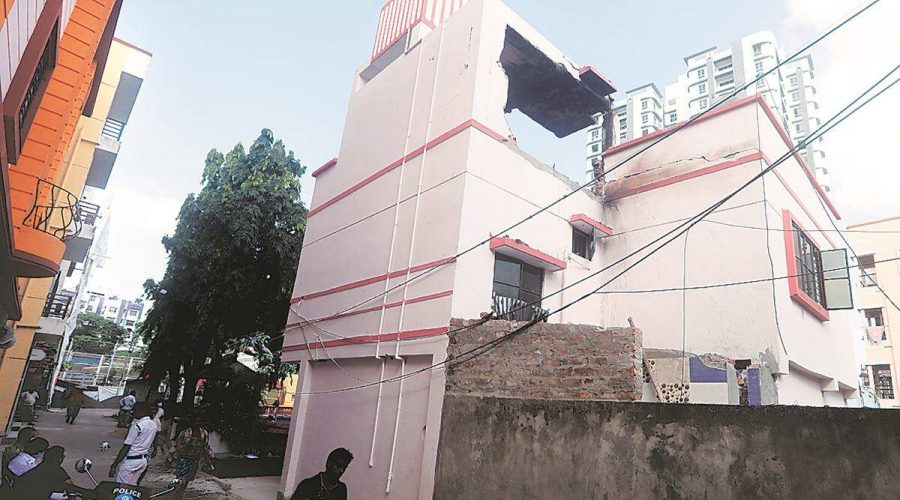 Reacting to the incident, the BJP accused the Trinamool Congress (TMC) of hoarding explosives ahead of last year’s Assembly elections, and demanded a probe by the National Investigation Agency (NIA). The roof of a two-storey club in Kolkata’s Beliaghata area blew off in an explosion early on Tuesday. No injuries or casualties were reported. The police prima facie suspect crude bombs were stored in Beliaghata Gandhi Math Friend’s Club. The bombs accidentally exploded, damaging the first floor of the club, the terrace wall and a sewer pipeline. The club’s asbestos roof was blown apart.
The police have started examining CCTV footage from nearby houses. Sources in the forensic team said they found splinters at the spot. Meanwhile, security in the area was stepped up.

“It was relatively a low-intensity blast that took place inside,” said a forensic official.

According to local residents, the first floor of the club was a computer centre where children were provided training. They said after hearing the sound of the explosion, they rushed out of their homes and saw that the club’s roof had been blown apart.

Reacting to the incident, the BJP accused the Trinamool Congress (TMC) of hoarding explosives ahead of last year’s Assembly elections, and demanded a probe by the National Investigation Agency (NIA).

BJP national general secretary Kailash Vijayvargiya tweeted, “Ahead of Assembly elections, TMC wants to create anarchy in West Bengal. Today, we even saw the proof of it after a blast took place at a club on Beliaghata main road. The roof of the club got destroyed and its remains fell to a far-off place. We have suspicions that a large quantity of explosives was hidden in the building.”

“Such a blast in the heart of the city is scary. Before Durga Puja, Mamata Banerjee granted Rs 50,000 to clubs to make bombs ahead of the Assembly elections. This has been done to make TMC win the polls because democratically they will lose. Now, they will come up with stories like it was a cylinder or fire cracker blast. I believe that all the clubs, which have received money from TMC, should be scrutinised. The NIA must initiate a probe in this case. Also, an investigation should be conducted against other clubs too,” she said.
Responding to the accusations, state Urban Development Minister and TMC leader Firhad Hakim said, “Such things happen in Uttar Pradesh. This is Bengal, not UP.”