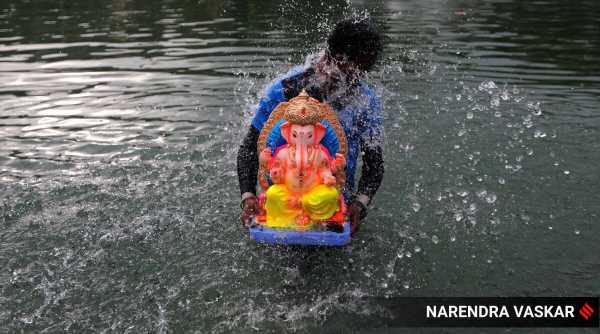 BMC has urged citizens to not carry out processions while getting the idols home or to the pandals and on the day of immersion. A total of 66,299 idols, including 5,953 of Goddess Gauri, were immersed in natural water bodies and artificial lakes across Mumbai on Tuesday, on the fifth day of the Ganpati festival.

There was no report of any untoward incident during the fifth-day immersions on Tuesday, said a civic official.

The 10-day festival, which in normal times used to witness large gatherings and long queues outside public mandals which host the celebrations, is being held in a subdued manner for the second year in a row due to restrictions imposed in the wake of the COVID-19 pandemic. Physical darshans are also banned, instead, organisers have been asked to arrange for online darshans for devotees. Of the total, 34,299 idols were immersed in artificial ponds set up in various parts of the city to avoid crowding at natural water bodies.

The Brihanmumbai Municipal Corporation (BMC), has increased the number of artificial ponds in the city. There are 173 artificial ponds this year, as opposed to 167 last year. There are 73 natural water bodies, sites for idol immersion in the city. Of the total immersed idols, 1,193 were of Ganpati ‘Sarvajanik’ (public) mandals, 59,153 household Ganesh idols, and 5,953 idols of Goddess Gauri.

The BMC had issued a 23-point charter asking people to observe the festival in a restricted manner and follow Covid appropriate behaviour. BMC has urged citizens to not carry out processions while getting the idols home or to the pandals and on the day of immersion. The Mumbai Police also issued an order stating that assembly of more than five people will not be allowed in any public place including Ganpati mandals during the festival.