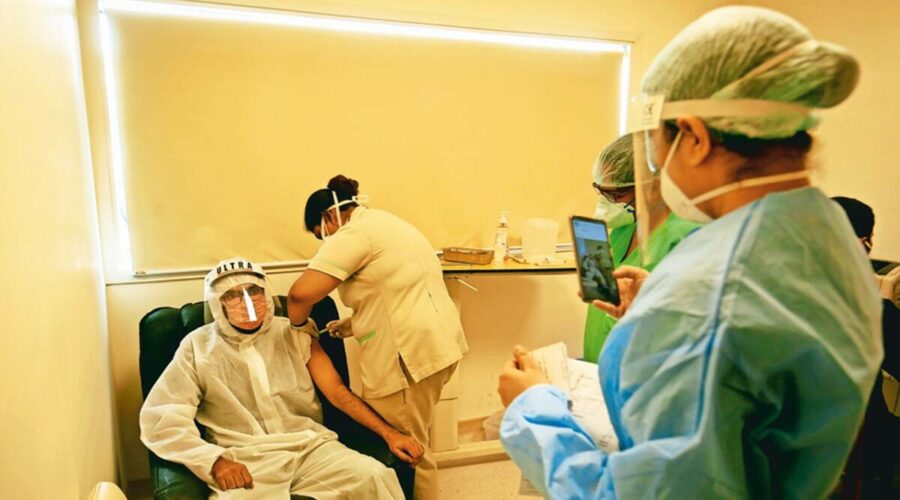 Fearing interruption in vaccination again, and with CoWin application unable to slot appointments, citizens — especially senior citizens — queued up outside vaccination centres since 6 am on Tuesday. Vaccination for citizens above 45 years of age resumed at 59 government and civic-run centres amid confusion and chaos on Tuesday. The vaccination drive for those over 45 had been shut in Mumbai since April 30.

Fearing interruption in vaccination again, and with CoWin application unable to slot appointments, citizens — especially senior citizens — queued up outside vaccination centres since 6 am on Tuesday. After opening for merely three hours, six centres exhausted vaccines stocks — including BKC jumbo centre, the largest facility — by 12 pm. BKC facility was also administering vaccination to the 18-44 age group.

BMC is expecting fresh stock of vaccine of up to 1 lakh doses by Wednesday night.

The civic body on Tuesday said that only 20 per cent of citizens above 45 years at each centre will be allowed to get vaccinated on Wednesday. Vaccination for this group will continue at government and civic-run centres after 12 pm.

The BMC said that only those coming for the second dose will be allowed without appointment. Citizens going to vaccination centres on Wednesday for the first dose need an appointment. To ensure better management, BMC has said that two separate queues will be maintained for citizens coming in for first and second dose.

Mayor Kishori Pednekar said that people taking the second dose will be given priority.

Many citizens complained that they had been turned away from centres after waiting for hours in the heat, that too without being inoculated. The BJP demanded that BMC ensure a hassle-free vaccination process for senior citizens and a separate queue for the same should be maintained.

“We understand there is a shortage of vaccines, but there should be more clarity on doses available at centres. This will cut the hassle of senior citizens and chaos at centres,” said a relative of a 60-year-old citizen from Chembur, who had come to take a second dose of Covishield at Bhabha Atomic Research Centre (BARC) Hospital, Anushakti Nagar. BARC Hospital was administering both Covaxin and Covishield on Tuesday, and had shut the vaccination at 12 pm.

People had queued up at the centre since early morning. By 11.30 am, many in the line who were not given tokens started seeking clarity. An official from the hospital then announced that no vaccines were left and those without token numbers should leave.

In Kandivali Shatabdi Hospital, Superintendent Dr Pratima Patil said they had only 1000 doses but there was a long queue for the second dose on Tuesday. “We are asking people to come tomorrow if they call to inquire about the vaccine. There is very little stock,” she said.

Centres said they have no clarity on when they will receive more supply. Several did not plan a session for Wednesday and did not open a slot for booking until late Tuesday evening.

In NESCO centre, which was shut on Tuesday, Dean Dr Neelam Andrade said they were not sure if they could resume vaccination on Wednesday. The decision would be taken if the centre receives fresh supply by late night.

Vaccination for 18-44 group with limited stock

Mumbai: Vaccination for citizens in the 18-44 age group continued for the fourth day with limited stock. In four days, 8173 citizens in this group were vaccinated. BMC will continue vaccination for them at five centres on Tuesday, between 9 am and 5 pm. It will only be for citizens who have registered and been allotted a slot by BMC. For Tuesday, too, each centre will have 500 doses.

BMC had received 20,000 doses for vaccination of the 18-44 age group on Friday night. Each centre was given 4000 doses. Vaccination will be done at Nair Hospital in Mumbai Central, Rajawadi Hospital in Ghatkopar, BKC Jumbo Covid Centre, Seven Hills Hospital in Andheri East and Cooper Hospital in Vile Parle.

Citizens took to Twitter to complain about the BMC’s mismanagement at the BKC facility, which administered the vaccine to both age groups.

To provide better facilities for senior citizens and disabled citizens above 45 years of age, BMC on Tuesday started a new vaccination centre at Kohinoor Parking Lot in Dadar West for the second dose of Covishield.

Two booths were functional at Kohinoor Parking Lot. Eligible citizens can register for vaccination while sitting in their vehicle. They were vaccinated while seated in the parked vehicle. The mandatory 30-minute observation period is also completed inside their vehicles.

Following the success of the drive-in facility, citizens have requested BMC to begin such facilities in parking lots of malls, which are currently lying unused. Yuva Sena core committee member Rahul N Kanal has also raised a request for a similar facility in Bandra west. ENS

05/04/2021 Cities Comments Off on Maharashtra: Vaccination for 45-plus group resumes amid confusion
India