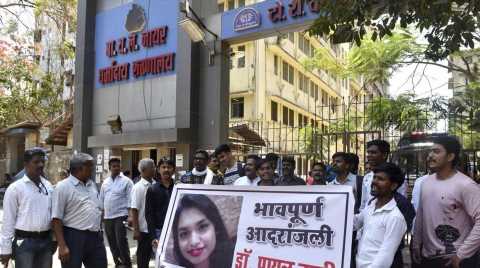 The state government committee investigating the allegations of caste-based harassment in the case of trainee doctor Dr Payal Tadvi’s suicide, will submit its report on Monday, said a committee member. Based on its findings, the Maharashtra Medical Council (MMC), which has the power to suspend doctors, will take actions against the accused.

Appointed by medical education minister Girish Mahajan, the committee is headed by Dr Prakash Wakode of the Directorate of Medical Education and Research (DMER).

So far, 24 people – residents, faculty members and class three and four employees – have been interviewed, said Wakode. However, the committee is yet to question the three doctors who are accused of abetting Dr Tadvi’s suicide and were arrested last week. “We wrote to the police three days ago,” said Wakode.

The committee will submit its report to senior government officials on Monday. Based on the findings, the MMC, a quasi-judicial body which has the power to suspend doctors, will take action against the accused. Dr Shivkumar Utture, president of the MMC, said, “This is the first time such a case has come to us. We are waiting the DMER report. In this case, we have to understand what qualifies as harassment.”