According to senior BJP leaders, four teams will travel across the four corners of the state for four days with a focus to win the taluk and district Panchayat elections along with the upcoming MLC election for 25 seats on December 10 and two seats in June next year. 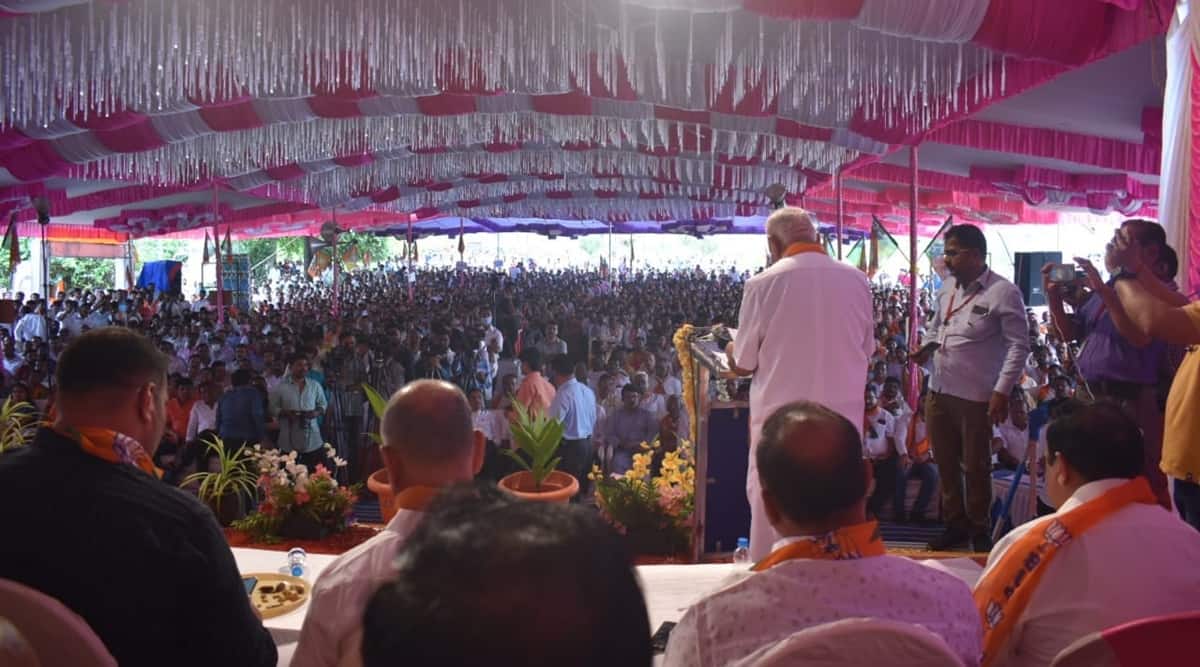 Speaking at the event in Koppal, Karnataka Chief Minister Basavaraj Bommai said, “Opposition Congress has been indulging in a slander campaign against us as my 100 days of successful pro-people administration has dashed Congress’ hopes of coming to power.”

“Those who try to throw muck at others should realise that it dirties their own hands,” Bommai said in retaliation to the allegations being hurled at him by Congress leaders.

The Chief Minister in an indirect reference to the alleged Bitcoin scam-hit out at Congress. “The alleged scam happened during the tenure of their own government. The national spokesperson of their party has stated this citing the case in 2016, 2017 and 2018. Who was in power then? who released the accused?” Bommai asked.

“Our government arrested the accused in a drug abuse related case and has registered three cases against him. We have initiated a probe through central investigation agencies. Now you are questioning those who arrested him. What should we do now?” Bommai added.

Reiterating his government’s stand on the issue, the Chief Minister said, “Our stand is firm. We will punish those who are involved in the alleged scam. There is no question of any leniency, whoever it may be. We will crackdown mercilessly.”

“Our objective is development of the state, expanding irrigation facilities, serving the poor, formulating welfare programmes and speedy development of the Northern Karnataka region. Me and my government are accountable to the people who elected us,” Bommai said.

According to senior BJP leaders, the four teams will travel across the four corners of the state for four days with a focus to win the taluk and district Panchayat elections along with the upcoming MLC election for 25 seats on December 10 and two seats in June next year.

Last week, the saffron party sent a list of its probable candidates for the MLC election to its parliamentary board in Delhi.

BJP, Congress and Janata Dal (Secular) are fielding candidates for the MLC election in order to win as many seats as possible to get control over the upper house of the Karnataka Assembly.

BJP has 32 seats currently, while Congress has 29 members and JD(S) has 12 members in the upper house.

The members of the legislative council, whose term expires next year, include state cabinet minister Kota Srinivas Poojary and Congress leader and leader of Opposition in the council S R Patil.

BJP has given charge of eight north Karnataka districts, including Haveri, to a team led by former Chief Minister B S Yediyurappa to conduct ‘Jan Swaraj Yatra’, BJP sources told The Indian Express.

Earlier, there were plans of Yediyurappa going for a statewide tour alone and to stop it from happening, the BJP leadership planned to conduct a yatra by dividing the regions among four senior leaders of the party.

“Yediyurappa was planning an individual statewide tour since he stepped down as the Chief Minister in July,” sources added.

Meanwhile, the yatra will not cover Bengaluru city despite the city civic body polls are on the cards.