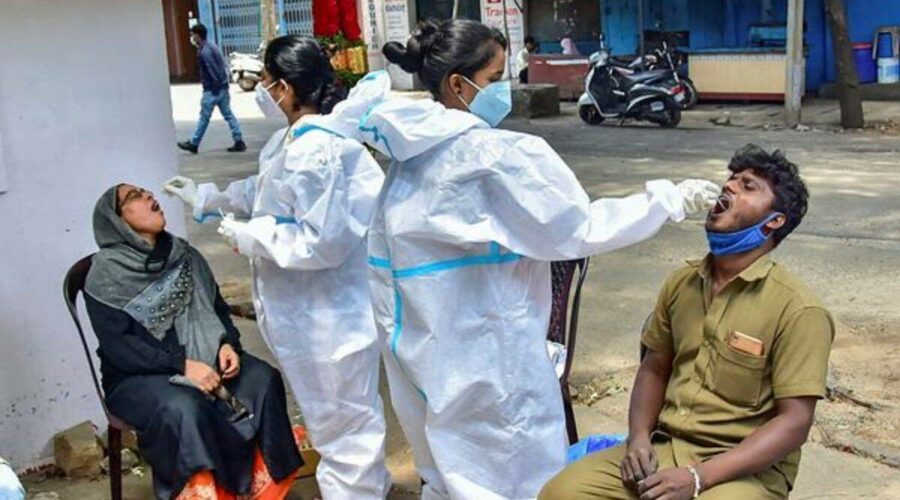 Karnataka Bengaluru Coronavirus (Covid-19) Latest News Live Updates: Out of the 4,517 new cases, 933 were from Bengaluru Urban, as the city saw 1,902 discharges and 12 deaths. Karnataka Bengaluru Coronavirus News Live Updates: Karnataka reported less than 5,000 new COVID-19 cases and 120 deaths on Sunday, taking the total caseload to 28.06 lakh and the toll to 33,883. The day also saw 8,456 discharges, continuing to outnumber fresh cases, taking the total number of recoveries in the state so far to 26,45,735.

Catch the latest news in Bengaluru and Karnataka as we bring you live updates on COVID-19, COVID-19 vaccination and lockdown across the state and more throughout the day.

The state Health and Medical Education minister Dr. K Sudhakar has appealed to people to celebrate Yoga Day from their homes and share photos and videos on social media.

The BBMP and the Karnataka state government have set ambitious targets to record a maximum single-day coverage in inoculating citizens on the occasion on International Yoga Day on Monday.

Speaking at a virtual meeting to conduct a special vaccination campaign in BBMP limits, Chief Commissioner Gaurav Gupta urged officials to make micro plans in every zone to ensure vaccination to eligible beneficiaries. “More camps must be set up and teams should be formed accordingly to vaccinate more people,” he said.

BBMP has set a target to vaccinate 65,000 people in 361 sessions planned across eight zones on Monday alone. As many as 433 vaccinators have been deployed for the process.

At the same time, the state government has a target of vaccinating seven lakh people on Monday. Health Minister K Sudhakar said the ‘Lasika Mela’ would cover all eligible groups apart from priority groups and the vulnerable population.

The race seems to be already building up in Karnataka Congress as to who will be the Chief Ministerial face during the next Assembly poll that is two years away, with some legislators projecting their leaders, prompting the party’s State unit chief D K Shivakumar to issue a diktat against it

While a section of party leaders is pitching for the Congress Legislature Party (CLP) leader Siddaramaiah for the Chief Minister’s post for the polls due in 2023, some are backing Shivakumar.

Reacting to Chamarajpet legislator B Z Zameer Ahmed Khan’s repeated statements projecting Siddaramaiah as the “next Chief Minister”, Shivakumar on Saturday said the party would go to polls under a collective leadership, and everyone have been asked to “stay within limits”.

In a bid to review and enhance preparations made by the state government for a possible third wave of the Covid-19 pandemic, Minister of Women and Child Development and Empowerment of Differently-abled and Senior Citizens Shashikala Jolle has convened a meeting on Monday in Bengaluru.

According to officials, the Minister will meet elected representatives, the Bengaluru district administration and officers of various departments.

“The meeting will be a platform to explore various possible precautionary ways to avoid the impact of the possible third wave of the pandemic especially on children,” Bangalore Urban District Deputy Commissioner, J Manjunath said.

He added that various approaches made for medical intervention and how the district administration should be prepared to mitigate the situation would be discussed extensively in the meeting.

Public transport in Karnataka is set to make a comeback from Monday with the state government announcing several relaxations in restrictions that were put in place from April-end in a bid to mitigate the spread of Covid-19. While buses are allowed to operate across the state with 50 per cent capacity, Bengaluru metro services will be available during peak hours only on weekdays.

“Buses can operate with up to 50 per seating capacity,” Chief Minister B S Yediyurappa announced citing the decision to the falling Covid-19 test positivity rate discussions with his cabinet colleagues based on suggestions made by the Technical Advisory Committee.

The Opposition Congress in Karnataka has demanded the BJP-led government to form a joint house committee to investigate the alleged irregularities in the irrigation department pointed out by some leaders.

“BJP leaders themselves have accused that the irrigation department has violated all norms and called for a tender of Rs 20,000 crore, further CM sitting quiet on this issue confirms the irregularity,” state Congress chief D K Shivakumar said.

He added, “Although there is a financial problem in the state after the coming of this government, the irrigation department has been flouting norms and permitting works,” claiming that he possesses information regarding the alleged irregularities of the irrigation department as told by BJP MLC and ex-minister Vishwanath. “For Rs 10 crore work they have made estimation bills at Rs 20 crore,” Shivakumar alleged.

“The Chief Minister should form a joint house committee in this regard. If necessary, make sure your party representative becomes its Chairman, then include representatives from the other parties,” he added.

As many as five people, including two women, have been booked by the Nelamangala police for allegedly attempting to sacrifice a 10-year-old girl from their neighborhood.

According to the police, the incident occurred at Gandhi Grama on the outskirts of the city with the accused being detained for questioning. “While we were informed that the gang did so to “ward off evil,” all five accused have denied the allegations and said that they had taken the girl to perform a puja for a stone laying ceremony for a temple they were planning to build,” an officer said.

While no arrests have been made so far, the accused have been charged under relevant sections of the Karnataka Prevention and Eradication of Inhuman Evil Practices and Black Magic Act and the Indian Penal Code, police added.

With the government allowing buses to operate at 50 per cent seating capacity from today, the Karnataka State Road Transport Corporation has informed that a total of 383 buses left their respective depots across the state for various services, as at 7 am.

According to KSRTC officials, 29 of the total 383 have left depots in capital city Bengaluru (20 from Kempegowda Bus Stand and 9 from Mysore Road Bus Stand).

Meanwhile, the Bangalore Metropolitan Transport Corporation has informed that 796 buses are out on the roads connecting various points in the Karnataka capital.

Professor and Head of the Department of Psychiatry Pratima Murthy has been appointed as the Director of the National Institute of Mental Health and Neuro Sciences (NIMHANS). According to an official order, she will hold the designation till she attains the age of 65 years, or until further orders, whichever is earlier.

As many as 16 of 30 districts in Karnataka where the Covid-19 positivity rate has been below five percent over the last week, including Bengaluru city, will be allowed to gradually re-open from June 21, the state government has decided after a meeting chaired by Chief Minister B S Yediyurappa.

Mysuru district, where positivity rate is above 10 percent, will remain under lockdown for two more weeks, Yediyurappa announced after the meeting, where the recommendations of the state technical advisory committee on lifting the lockdown were considered.

Good morning!
Welcome to the live blog from Bengaluru where we bring to you the latest updates on COVID-19 vaccination drive, COVID-19, lockdown, BBMP and more across Bengaluru and Karnataka. Follow the blog to stay up to date with the state in real time.

In a rare instance, Karnataka Sunday reported a higher case fatality rate (2.65%) than the test positivity rate (2.58%) indicating that the rate at which Covid deaths occur in the state is yet to subside even as daily infections are witnessing a visible drop.

Beginning next academic year (2021-22), Karnataka is likely to follow an updated academic curriculum in colleges across faculties as the government continues to push towards implementing the National Education Policy.

Here are a few contacts that might come in handy for you in emergency situations: