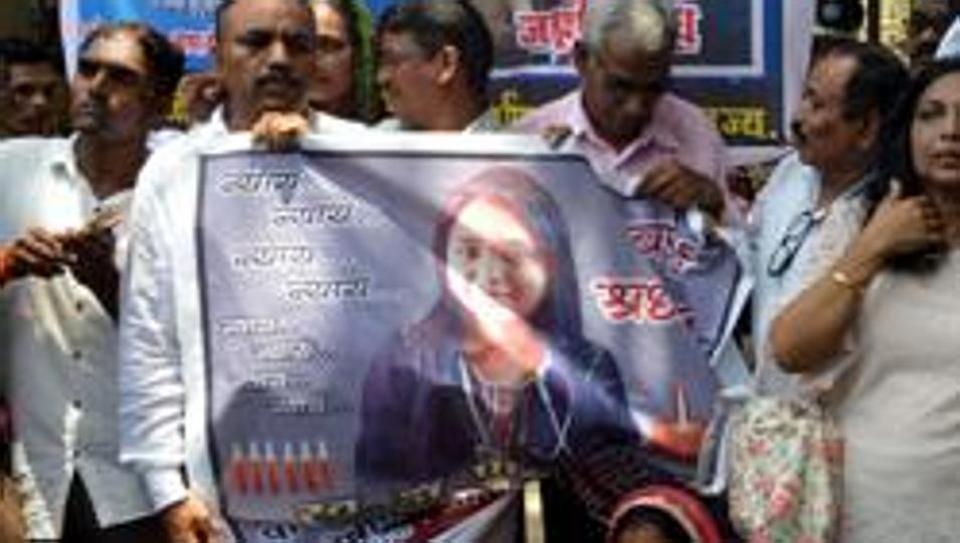 For Dr Salman Tadvi, husband of Dr Payal Tadvi who committed suicide on May 22, the only thing that matters is getting justice for his wife.

“I have not reported to work for the past week,” said Dr Tadvi, who is an MD in anaesthesia and an assistant professor at RN Cooper Hospital. Since the news of Payal’s suicide, Dr Tadvi has been at the forefront of the protests outside BYL Nair Hospital, where Payal was a postgraduate student and a resident doctor. He and other members of Payal’s family have alleged she was driven to suicide because three colleagues discriminated against her for belonging to a tribal community. The three accused are currently in police custody and have denied these allegations.

On Tuesday, the state health department’s anti-ragging committee said that Payal had faced “extreme harassment” and casteist slurs from the three accused of abetting her suicide. The probe, which is unrelated to the police investigation, found Payal was unfairly criticised by the three accused. The quantum of punishment will be announced soon by a committee appointed by the Maharashtra University of Health Sciences.

“Payal was the first doctor from her village at Chopda in Jalgaon district. Our main aim was to work for our community. In the future, we wanted to help bring healthcare to our community. But all that now just remains a wish,” said Dr Tadvi.

Dr Tadvi and Payal were married in 2016, two years after his parents approached her family with a marriage proposal. They waited two years because Payal was pursuing her studies. “Soon after she completed her MBBS in 2016, we got married,” said Dr Tadvi.

In 2018, the couple came to live in Mumbai after Payal gave her National Eligibility cum Entrance Test and Dr Tadvi got a job with RN Cooper Hospital. Payal joined BYL Nair Hospital in May 2018. “The busy schedule meant that we did not meet each other sometimes for eight days at a stretch,” said Dr Tadvi, who recalls Payal told him that her colleagues started harassing her from December 2018. “I rented a flat in Byculla and would go to meet Payal every day or second day to encourage her.” Dr Tadvi said coming to Mumbai had been Payal’s dream and the couple had hoped to buy a flat in the city.

05/29/2019 Cities Comments Off on ‘Have not reported to work since Payal’s death’: Husband
India